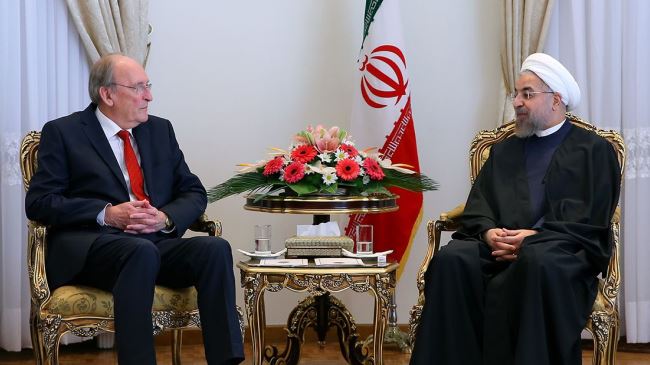 In a meeting with Irish Parliament Speaker Sean D. Barrett in Tehran on Wednesday, President Rouhani added that the International Atomic Energy Agency (IAEA) carried out numerous snap inspections of Iran’s nuclear sites over the past 12 years and verified non-diversion in the country’s nuclear energy program.

“Iran’s activities in the nuclear issue are completely transparent and we seek a win-win agreement in the negotiations which will serve the two sides’ interests,” President Rouhani stated.

He added that Iran seeks positive and constructive interaction with all countries in the world.

“Sanctions which have recently been imposed on Iran in an illegal way had been detrimental to all,” he pointed out.

On the sidelines of the 69th annual session of the UN General Assembly in New York earlier this month, some heads of European countries explicitly confessed that the European Union has suffered losses from sanctions against Tehran, the Iranian president added.

“Ireland is not among the P5+1 countries but as a member of the European Union, it can be effective in the fulfillment of the bloc’s serious determination to settle the Iranian nuclear issue,” Rouhani said.

Iran and the five permanent members of the UN Security Council – Russia, China, France, Britain and the US – plus Germany held their latest round of talks in New York on September 18-26 to work out a final agreement aimed at ending the longstanding dispute over Tehran’s civilian nuclear energy program before a November 24 deadline.

The Irish senator, for his part, said his country supports nuclear talks between Iran and the six countries with the purpose of reaching a comprehensive deal.

He also called for the expansion of Tehran-Dublin relations in various fields.