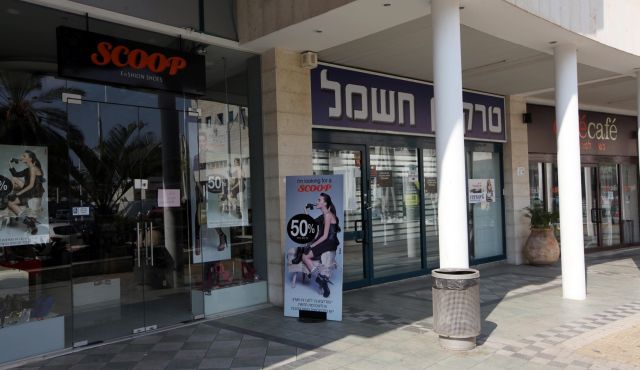 The town of Sderot was largely closed for business over the summer due to constant rocket fire. Photo by Eliyahu Hershkowitz

The 50 days of Operation Protective Edge over the summer took its toll on Israel’s hotel industry, on exports, retail sales and new home purchases, according to figures released on Tuesday.

Exports and home sales were ailing before the fighting, which only exacerbated the downturn,the figures show. For tourism and retail, however, Protective Edge dealt a heavy blow to sectors that had been enjoying strong growth.

Citing Protective Edge, the Bank of Israel last week revised its forecast for 2014 economic growth downward to 2.3% from the 2.9% it projected in June.

Overnight stays by foreign tourists in Israel’s hotels plunged 38% in August from a year earlier to about 482,000, the lowest figure since the peak of the Second Intifada 12 years earlier, according to figures from the Israel Hotels Association released on Tuesday. .

On the other hand, overnight stays by Israelis actually rose in the month to 1.8 million, saving the hotel industry from a disaster, it said. All told, it added up to an 8% drop for the month from the same time in 2013.

“July-August was supposed to be the peak season for hotels, with expectations of a 15% increase in tourist stays,” said Shmuel Tsuriel, CEO of IHA. “In anticipation, staff was hired and hotels readied for a record season. Instead, because of Protective Edge, they registered a drop in income of about 330 million shekels [$89.5 million].”

Last month, the government approved about 500 million shekels in aid for the tourism sector, including hotels.

Merchandise exports dropped 14.2% in annualized terms from June through August, according to figures released by the Central Bureau of Statistics on Tuesday. Imports were down as well, although by a more modest 7%, with imports of raw material down 9.5%, it said.

Industrial exports – a major engine of economic growth for Israel – have been in a decline for some time. Their 14.3% decline in June- August, was not much worse than the 13% drop in the March-May period.

High-tech exports were the worst hit during the war months, dropping at a rate of 16.4%. But service exports for June-July, which cover less than half the duration of the fighting were down just 3.2%. Looking at local demand, retail sales dropped 0.9% in June-July, reversing a 1.4% rise in the previous two-month period, the CBS said.

Purchases made with credit cards dropped 0.5% in June-August, an unusual decline that can only be explained by the impact of Protective Edge, credit card companies issuers reported. Not surprisingly, the biggest drops occurred in purchases of tourism and leisure services, but food shopping also posted a decline.

Despite the wartime decline, credit card spending is still up 5.3% in the first eight months of the year, from the same time in 2013. Nevertheless, the figure testifies to a longer-term slowdown in consumer spending. Purchases with plastic grew 6.7% in 2012 and 5.6% in 2013.

Meanwhile, the CBS said on Tuesday that new-home purchases plunged 35% in July-August from the same time in 2013 to just 2,960 units.

“The impact of Protective Edge on the market was significant, mainly because it lasted 50 days during which big areas were put out of bounds and many people were called up for reserve duty,” said Gil Ovadia, co-CEO of the property developer Highland.

Nevertheless, new-home sales have been down this year by 22.5% to 13,270 units, according to CBS figures. That, explains Ovadia, is because of Finance Minister Yair Lapid’s plan to exempt many categories of new-home buyers from the 18% value-added tax.

“The delays in legislating zero-VAT have left a cloud of uncertainty over the market and many young couple are sitting on the fence until the law is passed,” he said.