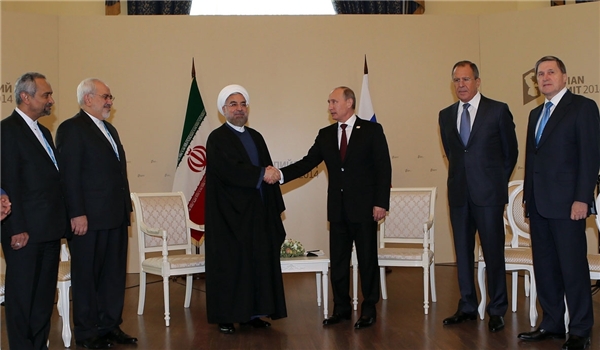 “We acted effectively in the meeting of the Caspian Sea littoral states and achieved good results because of Iran’s (constructive) stances,” President Putin said on Monday.

Meantime, the Russian president noted that the countries bordering the Caspian Sea will hold joint emergency exercises in 2016.

“As a first step, we suggest organizing a full-fledged five-party emergency services exercises that will help develop the procedures for notifying and coordinating rescue units,” President Putin said.

He further expressed pleasure in a possible future meeting with the Iranian president, saying that each time the two leaders meet they survey a part of the bilateral ties between the two states.

On Monday, the five littoral states of the Caspian Sea agreed on a joint statement that stipulates basic principles of their cooperation in the region, which has become an area of interest for several countries after the collapse of the Soviet Union in early 1990s.

On September 26, the summit’s participants agreed to prevent the military presence of non-regional countries in the Caspian region. They also made significant progress in terms of preparing a convention on the legal status of the Caspian Sea, which may be signed next year.

The Caspian Sea’s large fish resources and oil and gas deposits have made it a subject of territorial negotiations among the five states that include Russia, Azerbaijan, Iran, Kazakhstan and Turkmenistan.

The leaders of Russia, Azerbaijan, Iran, Kazakhstan and Turkmenistan met in Astrakhan, Southern Russia, on September 29 for the 4th Caspian summit which focused on key issues concerning cooperation among countries bordering the Caspian Sea, as well as implementing decisions approved at the previous summit in Baku in 2010. Multilateral agreements were also signed at the summit.