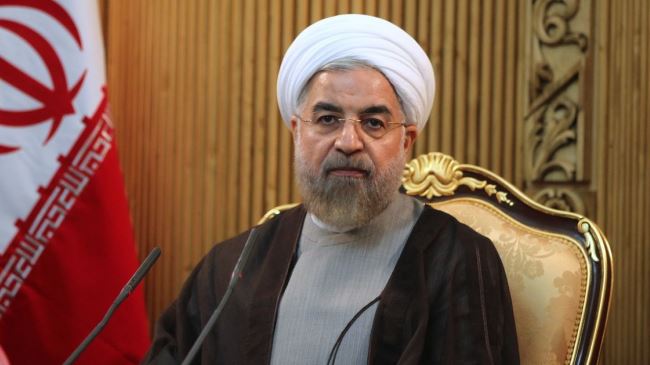 President Rouhani criticizes US for dragging feet in N. talks

TEHRAN (FNA)- Iranian President Hassan Rouhani lambasted the US for killing time in nuclear talks between Tehran and the Group 5+1 (the US, Russia, China, Britain and France plus Germany).

“Iran and the G5+1 can come into terms with each other on Iran’s nuclear case before the deadline,” President Rouhani said in an interview with Rossiya-24 TV channel on Monday.

Iran is earnestly committed to reaching a consensus and if the other side is committed as firmly, “we can reach agreement”, he added.

Rouhani called on the negotiation partners to act more resolutely, addressing particularly the US which, as he said, has been dragging its feet more than others even though all parties understand the importance of reaching an agreement as soon as possible.

“The only side which moves slowly is the US. Therefore, we hope that they think of long-term interests and then we can reach a settlement for the nuclear dossier,” he added.

The 7th round of talks between Iran and the Group 5+1 was held in New York on the sidelines of the UN General Assembly meeting earlier this month.

Iranian Deputy Foreign Minister and senior negotiator Seyed Abbas Araqchi underlined on Friday that Tehran would never accept to make a deal through crossing or ignoring its redlines in the talks with the Group 5+1.

He underscored that Iran was ready to accept solutions that would allay concerns over the country’s nuclear energy program provided that they take into consideration the Islamic Republic’s rights and redlines.

Araqchi said the Iranian negotiating team would continue to insist on Iran’s rights and will not overstep the country’s “redlines” in the talks.

Acknowledging that the two sides were still divided over “key issues”, the Iranian negotiator said, “We will by no means leave the negotiating table, but will not retreat an iota from Iran’s rights either.”

“The nuclear negotiations have reached a breathtaking point and both sides have entered into many details,” Araqchi pointed out.