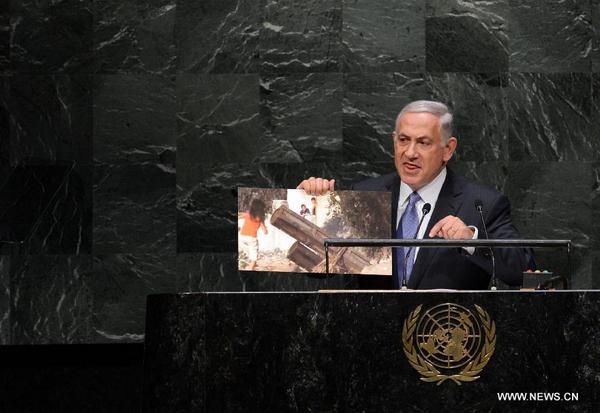 Israeli Prime Minister Benjamin Netanyahu’s anti-Iran remarks were to justify the crimes the regime committed in its latest war against defenseless Palestinians in Gaza, Iran’s mission to the UN says.

“The remarks made by the Israeli regime’s premier include baseless allegations against the Islamic Republic of Iran and are basically made with the aim of attacking others for justifying the crimes the regime recently committed against Palestinian civilians,” Iran’s deputy ambassador to the UN, Khodadad Seifi, said.

“The Israeli prime minister desperately sought to promote Iranophobia and Islamophobia to achieve his goals,” the Iranian official said.

It is “ridiculous” that a regime with a record of “violence” and no respect for UN resolutions accuses others, the diplomat said.

Netanyahu stepped up the regime’s belligerent rhetoric against Iran during his speech at the 69th annual session of the UN General Assembly in New York on Monday.

Seifi further noted that Netanyahu’s remarks made the attendees at the UN gathering laugh as the Tel Aviv regime has breached international laws and regulations in its recent attack against Palestinians.

Israel unleashed aerial attacks on Gaza in early July and later expanded its military campaign with a ground invasion into the Palestinian territory. Over 2,130 Palestinians lost their lives and some 11,000 were injured.

The Iranian diplomat said the recent crimes against Gaza are just one set of incidents among many such crimes.

The Iranian deputy envoy to the UN added that Israeli nuclear weapons are a source of serious concern in the region and the rest of the world since Israel has repeatedly shown how bloodthirsty it is.

He also stated that Netanyahu’s comments are part of Tel Aviv’s campaign to undermine the negotiations on Iran’s civilian nuclear program.

Netanyahu reacted to nuclear talks between Iran and the Sextet of world powers, saying, an agreement between the two sides “would pose the gravest threat to us all.”

Iran and its negotiating partners — the United States, France, Britain, Russia, China and Germany– have been holding talks to resolve the dispute over the Islamic Republic’s nuclear energy program.

Since 1958, when Israel began building its Dimona plutonium- and uranium-processing facility in the Negev Desert, it has secretly manufactured numerous nuclear warheads, making it the only player in the Middle East that possesses nuclear weapons.

Former US President Jimmy Carter has attested to the existence of the Israeli nuclear arsenal, which he said has between 200 and 400 warheads.