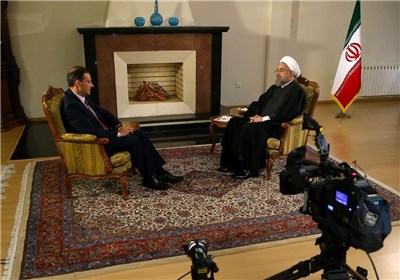 TEHRAN (Tasnim) – Iranian President Hassan Rouhani ruled out speculations that the country might provide Europe with natural gas should Russia decides to halt energy exports to the European states.

“Today’s conditions are not such that if Russia stops selling gas to Europe, Iran can serve as an alternative for Russia’s gas exports to those countries,” President Rouhani said in an interview with Russia-2 television channel.

Rouhani emphasized the need for energy cooperation with Russia, saying, “Interaction and healthy competition among gas-exporting countries will serve the interests of all countries.”

The Iranian president also pledged to help Russia get around the Western-imposed sanctions by providing that country with the Iranian products.

“In the current situation, we will give the Russian government and nation whatever assistance we can provide, and the Russian people will see the Iranian brands in their shops by the next year, once the necessary trade requirements are met,” he underlined.

The Iranian president also called for cooperation among the countries that have been slapped with the Western sanctions.

“Sanctions are detrimental to all countries, but the sanctioned countries should counteract and the others should also offer help,” he explained.

Rouhani further unveiled plans for trading between Iran and Russia under a barter system, which he said dates back to the time before the Western sanctions against Moscow took effect.

“Before the announcement of the policy of (Western) sanctions against Russia, the Islamic Republic of Iran had reached agreements with Moscow on how to enhance ties and barter goods, which will be soon implemented,” the president added.

A crisis in Ukraine has plunged Russia-West relations to their lowest level since the Cold War ended in 1991.

Western governments have imposed sanctions on Moscow, including on its financial and energy sectors, and Russia has already hit back by stopping imports of many food products.