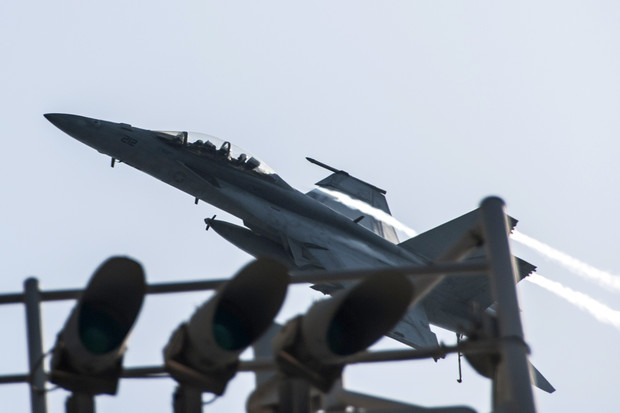 Obama says U.S. role in Iraq not ‘America against ISIL’

President Barack Obama said U.S. airstrikes in Iraq are an example of the country leading a coalition to aid an ally, not a direct confrontation with Islamic State militants.

“This is not America against ISIL,” Obama, using the administration’s shorthand for Islamic State, said in an interview with CBS’s “60 Minutes” that aired yesterday. “This is America leading the international community to assist a country with whom we have a security partnership with, to make sure that they are able to take care of their business.”

The interview was conducted after Obama returned to the White House from theUnited Nations General Assembly, where he pressed for more nations to fight Islamic State in Iraq and Syria, won a Security Council resolution calling for a crackdown on the flow of foreign fighters, and laid out a U.S. strategy to counter Muslim extremists with force.

“America leads,” Obama said in the interview. “We are the indispensable nation. We have capacity no one else has. Our military is the best in the history of the world. And when trouble comes up anywhere in the world, they don’t call Beijing. They don’t call Moscow. They call us.”

Obama’s remarks reflect political cross-currents at home, where polls show increased support for U.S. airstrikes to quell the rise of Islamic militants, even as members of his Democratic Party remain wary of long-term military engagements. Obama sought, as he has throughout the last month, to contrast his strategy with the ground wars pursued by his predecessor, President George W. Bush, in Iraq and Afghanistan.

The Sept. 26 interview was the first given by Obama since U.S. aircraft and missiles struck targets in Syria in a joint operation with five Arab states.

“Over the past couple of years, during the chaos of the Syrian civil war, where essentially you have huge swaths of the country that are completely ungoverned,” the president said, Islamic State was “able to reconstitute themselves and take advantage of that chaos.”

The initial Syria air attacks targeted Islamic State and areas purported to be aligned with the Khorasan Group, an al-Qaeda affiliate that U.S. officials described as plotting terrorist attacks in the U.S. and Europe. U.S. targets in the ongoing strikes have included oil refineries, an effort to cut off the group’s financing.

In the latest strikes, conducted Sept. 27 and 28, aircraft from the U.S., Saudi Arabia and the United Arab Emirates destroyed a tank, armed vehicles, a Humvee, and struck a command-and-control center and four modular oil refineries in Syria owned or controlled by Islamic State forces, according to a statement issued by U.S. Central Command.

Obama said U.S. intelligence officials failed to appreciate the gains made by Islamic State extremists in Syria during the last few years of that country’s civil war.

“I think they underestimated what had been taking place in Syria,” Obama said. He also said it was “absolutely true” that the U.S. overestimated the ability and willingness of the Iraqi military to fight.

Obama said he recognized the “contradiction” in the U.S. striking Islamic militants in Syria as they fight the Syrian regime led by President Bashar al-Assad — a regime the U.S. has said holds no legitimacy. While Syria won’t be stabilized with with Assad in power, the president said, Islamic State and Khorasan Group represent more immediate threats.

“They’re all connected, but there’s a more immediate concern that has to be dealt with,” Obama said.

Obama has sent hundreds of U.S. advisers to Iraq to assist defense forces in their efforts to blunt and push back Islamic State advances. The U.S. and its allies have also been assisting Kurdish forces in northern Iraq with weapons, airstrikes and military advisers.

The president said Iraq faces a “generational challenge” in seeking to quell divisions between Sunni and Shiite sects of the Muslim faith at the center of the divisions that allowed Islamic State to move so quickly and deeply into the country.

While new Iraqi Prime Minister Haidar al-Abadi has made “some progress” in moving the country past those divisions, he still faces “a great challenge,” Obama said.

Once Iraq makes significant political progress, then the U.S. can start to reduce its role, Obama said.

“With the allies, with their ground troops, and if we do our job right and the Iraqis fight, then over time our role can slow down and taper off,” Obama said.

In his Sept. 24 speech to the UN General Assembly, Obama said the brutal ideology of terrorist groups such as Islamic State must be eliminated.

Obama later led the UN Security Council in its 15-0 vote for a resolution aimed at information sharing and cracking down on the flow of foreign fighters who go into conflict zones and then back to their home countries.

U.S. intelligence agencies estimate that more than 15,000 individuals from more than 80 countries have traveled to Syria in recent years to join its civil war. Many joined groups such as the al-Nusra Front, an al-Qaeda offshoot, and Islamic State.

Some foreign fighters who hold passports from the U.S. or European countries could return home to launch terror attacks, U.S. officials have said.