Iran giving only training to Iraq in fight on ISIL: Commander 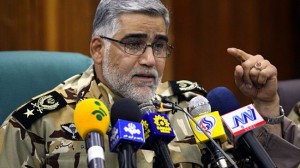 TEHRAN (Tasnim) – A senior Iranian commander said the country’s assistance to neighboring Iraq in the fight against the Islamic State in Iraq and the Levant (ISIL) terrorist group was confined to military training alone.

“The major assistance we have provided for our brother, friend and neighbor country, Iraq, have been training assistance, and we tried to provide that country with special help in the training sphere,” Commander of the Iranian Army Ground Force Brigadier General Ahmad Reza Pourdastan told reporters in Tehran.

He noted that Iran will study possible request by the Iraqi government for military assistance to crush the ISIL militants.

Given the fact that Iraqi people are under pressure to meet their daily life needs, the Islamic Republic has dispatched various goods to the Arab country to relieve the pain of its nation, the commander added.

Since early this year, Iraq has been facing a growing militancy by the Takfiri ISIL terrorist group and its allied militants, who have taken over areas in the country’s west and north. The crisis has deteriorated since June, when the ISIL declared a so-called caliphate in the territories they have seized.

The ISIL terrorists have also threatened other communities, including Shiites, Sunnis, Kurds, Christians, and others, in Iraq.

Amid the tensions in Iraq, Iran is known as the first country to help the Arab country and has always voiced support for Iraq’s solidarity and prosperity.