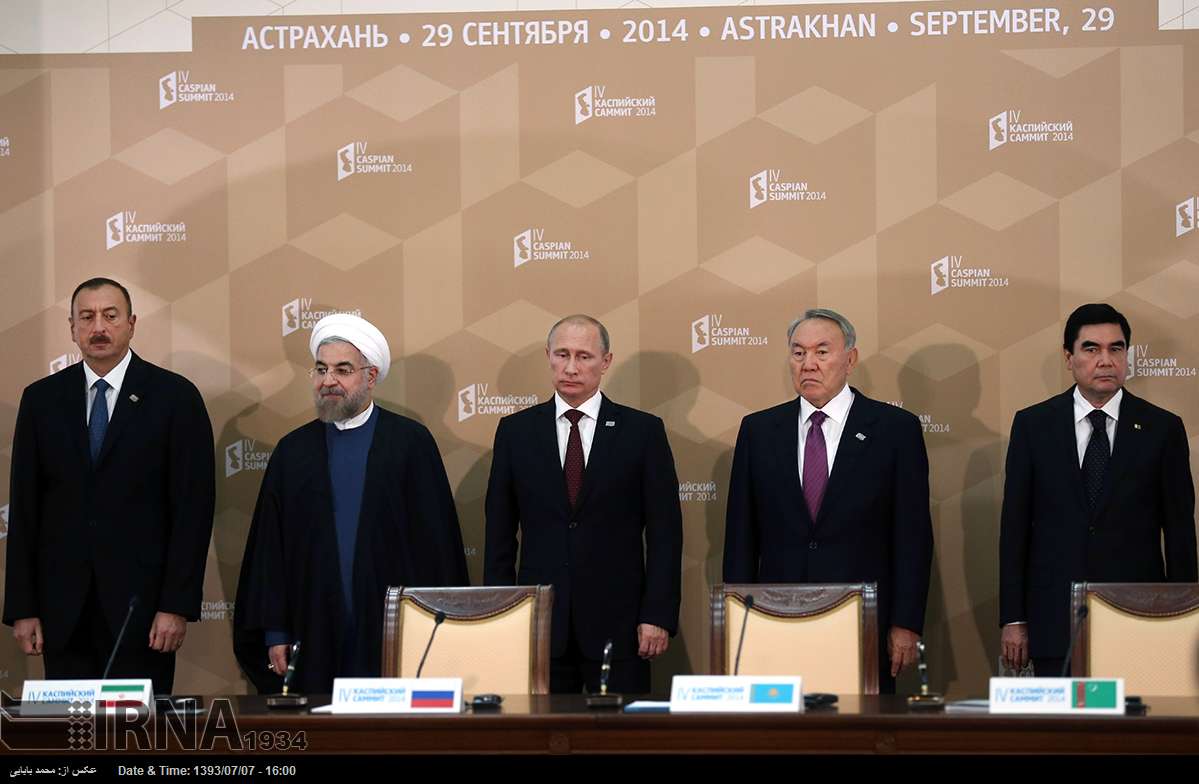 The heads of Caspian Sea littoral states came together at the forth Caspian summit in Astrakhan, Russia on September 29.

The ‘Caspian Five’ are meeting to discuss the Caspian Sea’s legal status and the security of the region.The participants also intend to discuss also the development of cooperation in the field of transport, protection of the Caspian Sea ecosystem.

The heads of the Caspian littoral states have agreed on a political statement, which defines the main principles of cooperation among them for the first time, Russian President Vladimir Putin said a meeting of the heads of states, Russia 24 reported.

Putin said the participants exchanged views on relative issues based on a common understanding.

“The reached agreement meets the long-term interests of all parties. I am grateful to our partners for their willingness to find the necessary and acceptable compromises,” Putin said.

President Aliyev, addressing the meeting held in an expanded format, said Azerbaijan attaches great importance to the development of cooperation with its neighbors in the Caspian Sea in the military and military-technical fields.

“We believe that the presence of armed forces of the involved parties and their military activities in Caspian Sea should be based on the principle of equal treatment of security for all littoral states. This will enhance mutual trust between the countries of the region. Caspian Sea should remain a zone of peace, friendship, cooperation and neighborhood,” he said.

“To this end, joint investments, cooperation and collective actions are needed,” he added.

Meanwhile, President Nazarbayev proposed to hold the next summit of heads of state of the Caspian Sea countries in Kazakhstan.

The president also proposed to hold such meetings every two years.

The work on the draft convention on the legal status of the Caspian Sea develops positively and the countries see significant convergence of their positions on the majority of terms of this important document, President Berdimuhamedov said.

“The essence of the document is our common desire and commitment to turn the Caspian Sea region into a zone of peace and to put it as an example for resolving all issues only through political and diplomatic means by respecting the sovereignty and territorial integrity of states,” the Turkmen president said.

The dialogue on the Caspian Sea issue should be conducted by taking into account the interests of all parties, that’s to say it should be based on the principle of mutual respect, Berdimuhamedov noted.

Apart from the summit, Putin will hold separate meetings with the Presidents of Azerbaijan, Iran, and Turkmenistan.

The Caspian Sea is a unique water area in terms of its bio and ecological resource, which includes more than 500 kinds of sea plants and 854 kinds of fish species, including the Caspian sturgeon which accounts for 90 percent of the world stock of sturgeon fish.

A predicted amount of the Caspian hydrocarbon resources has been estimated at around 18 billion tons, with the proved reserves put at four billion tons, which brings the Caspian Sea to second position after the Persian Gulf in the rating of the world biggest oil and gas reserves.

For more than 20 years, Russia, Azerbaijan, Iran, Kazakhstan and Turkmenistan have been in talks on the division of the Caspian Sea shelf.