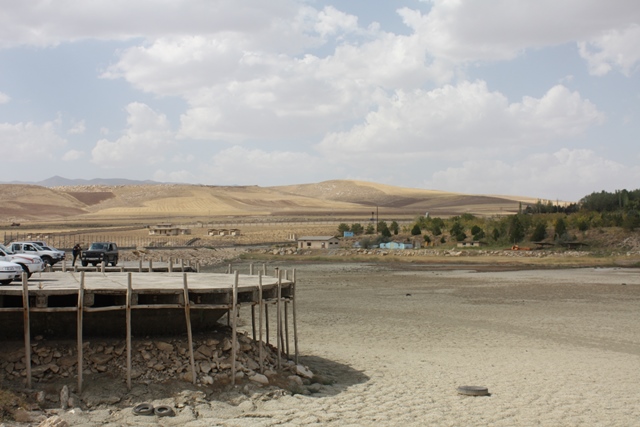 Lake Urmia is situated in North West of Iran and it has been shrinking at an alarming rate. Considerable part of it has been lost

Lake Urmia is one of the largest inland lakes. It is situated in North West of Iran.  This vast lake – which is a Ramsar Site, a UNESCO Biosphere Reserve and a National Park which for long contributed to the biodiversity of the region as well as livelihood of local communities – has been shrinking at an alarming rate and a considerable part of it has been lost.

Back in March, the Government of Japan provided a grant of one million dollars to UNDP, to aid in the restoration of Lake Urmia.  The grant was implemented as a new component of the ongoing Conservation of Iranian Wetlands project which is a UNDP project in partnership with the Islamic Republic of Iran’s Department of Environment.  The key factor in this project has been the engagement of local community in sustainable agriculture practices.

During his trip Mr. Hunda along with DoE and UNDP officials visited the lake to observe its current condition

To see the condition of the lake as well as the progress of the project, the Ambassador of Japan in the Islamic Republic of Iran, H.E. Kuji Hunda along with the UNDP Deputy Resident Representative, Mr. B. Murali and Department of Environment officials visited Urmia 21 September. During this trip Mr. Hunda visited the lake to observe its current condition, he met with the Governor General of West Azarbaijan, attended a sustainable agriculture workshop during which local community farmers are trained on modern agricultural methods that can result in 35% water-saving and also visited Miandoab village where farmers were implementing the sustainable agriculture techniques.

At his meeting the Governor General, the Ambassador of Japan said “I am very glad to see that the contribution which the Government of Japan has made in support of the restoration of Lake Urmia has been successfully implemented.  We all realize that restoration will not happen overnight but we hope that our contribution will help restore Urmia Lake in the long-term.”

Mr. Murali also spoke during this meeting and he said:  “This sustainable agriculture project represents a paradigm shift in the way we are approaching in restoring Lake Urmia.  So far the solutions that were being looked at were primarily engineering in nature.  For the first time we are beginning to look at an ecosystem approach particularly with the participation of the local community as a means to addressing the challenges in restoring this wonderful lake.  I would like to take this opportunity to thank His Excellency for the generous support provided by the Government of Japan which has enabled this pilot to be expanded from one village to 41 villages today.  I would like to add that it would still be the massive national resources that could really play a very strong role in ensuring this model is sustained and expanded to cover other areas of Lake Urmia.”

“From all indications which are available to us so far, we have made very satisfactory progress, but we still have a long way to go with limited time and challenges.  On behalf of UNDP, I would also like to acknowledge the strong partnership we enjoy with the Department of Environment led by her Excellency Madam Ebtekar and also Dr. Keykhah the National Program Director which has resulted in the joint progress we have made so far” said Mr. Murali. He added: “UNDP has always been and will continue to be on standby to respond to the Government of Iran’s request and continue the partnership and support to make this project a success” said Mr. Murali.

While visiting one of the pilot sites in Miandoab, Mr. Hunda interacted with local farmer.  When he asked one of the farmers why he decided to join the sustainable agriculture plan, the man said: “By following this model I will use about 35% less water for producing the same level of crops, but going beyond this I feel happy to be participating in a program which in the long run will result in the restoration of Lake Urmia.  I want the future generations to be able to benefit from living around a lake full of water.”