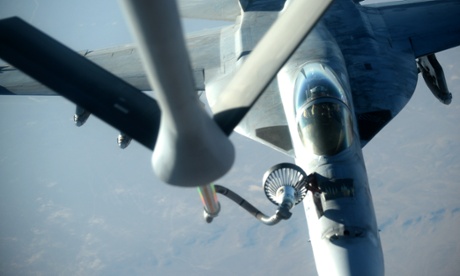 FILE — In this Tuesday, Sept. 23, 2014 file photo released by the U.S. Air Force, a U.S. Navy F-18E Super Hornet fighter jet receives fuel from a KC-135 Stratotanker over northern Iraq after conducting airstrikes in Syria as part of U.S.-led coalition airstrikes on the Islamic State group and other targets in Syria. The U.S. is struggling to counter anger among the Syrian opposition, where many believe that the air campaign against extremists in the country is only helping President Bashar Assad and that Washington is coordinating with Damascus, despite American insistence it backs the rebel cause. (AP Photo/U.S. Air Force, Shawn Nickel, File)