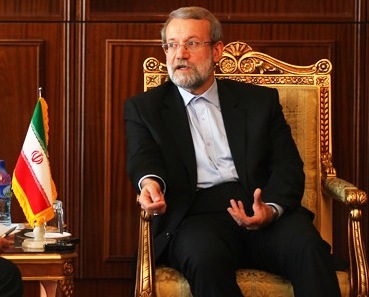 West not concerned over terrorism in Mideast: Iran speaker

Iranian Majlis Speaker Ali Larijani has criticized the West’s double standards in fighting terrorism, saying Western countries have never been concerned about the threat of terrorism in the Middle East.

He added that Western countries are concerned about the Takfiri ISIL and other terrorist groups in the Middle East region because they are now being challenged by the terrorists whom they financed.

The countries that nurtured terrorist groups should acknowledge their past mistakes instead of accusing others of supporting terrorism to win concessions, Larijani said in reaction to British Prime Minister David Cameron’s allegations of Tehran supporting terrorism.

Larijani said Iran is serious in its battle against terrorism, adding that the Islamic Republic will not join the so-called US-led coalition against ISIL militants.

“We are serious in fighting terrorists and…we will never join false coalitions [in fighting ISIL],” he said.

The ISIL terrorists control large areas of Syria’s east and north. The ISIL sent its Takfiri militants into Iraq in June, seizing large parts of land straddling the border between Syria and Iraq.

The terrorists have committed heinous crimes and threatened all communities, including Shias, Sunnis, Kurds, Christians and Izadi Kurds, during their advances.

Earlier this month, US President Barack Obama authorized the use of airstrikes against ISIL terrorists in Iraq. Meanwhile, the United States and five Arab countries – Saudi Arabia, the UAE, Qatar, Bahrain and Jordan – have reportedly carried out at least 200 airstrikes against the ISIL militants operating inside Syria.