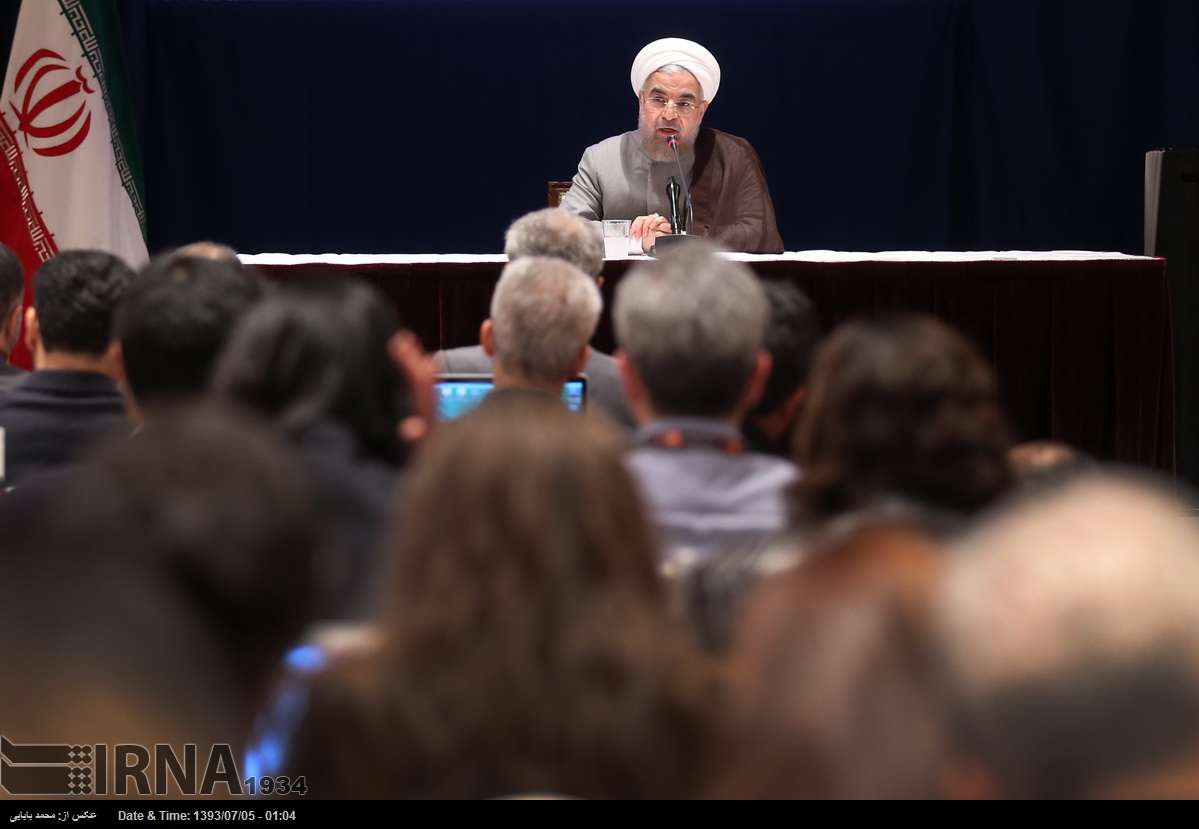 Iranian President Hassan Rouhani says “the danger of extremism” has spread across the globe.

“The innocent people of the Middle East are now facing savage terrorists… The danger of violence, extremism and terrorism is currently felt across the world,” Rouhani said at a press conference on the sidelines of the 69th annual session of the United Nations General Assembly in New York on Friday.

Referring to the ISIL Takfiri terrorists committing atrocities in the Middle East, Rouhani said certain countries must stop supporting the Takfiris in the region.

“The violence has no connections with any holy religions,” Rouhani further added.

“The terrorists’ financial resources must be cut off. The countries that have assisted them financially… must feel the burden of this responsibility and stop financial assistance to terrorist groups,” Rouhani noted.

“Terrorism will not be destroyed by bombardment of a few locations. Since 2001, thousands of aerial bombardments have been carried out under the rubric of fighting terrorism, but we see that those airstrikes have resulted in the spread of terrorism,” he added.

The ISIL terrorists currently control parts of Syria and Iraq. They have carried out heinous crimes in the two countries, including mass executions and beheadings of people.

The United States and its partners began targeting Takfiri militants in Iraq last month and expanded the air raids into Syria earlier this week. Syria has warned that any military action inside its territory must be coordinated with Damascus.

Referring to Iran’s nuclear energy program, President Rouhani said “brave decisions” need to be made in order to resolve the West’s dispute with Iran over the issue.

Rouhani reiterated that Iran will never stop its peaceful nuclear activities, which have always been under the supervision of the International Atomic Energy Agency (IAEA) and within the framework of the nuclear Non-Proliferation Treaty (NPT).

“Iran will never give up its peaceful, legal (nuclear) activity. Uranium enrichment will continue in Iran. Any agreement in which enrichment on Iranian soil is not considered will not be acceptable to us.”

He also said that “substantial progress” has been made since last year in nuclear negotiations between Iran and the P5+1 group – the United States, Britain, Russia, China, France and Germany.

The Iranian president went on to say that Tehran is pursuing “a win-win agreement” that guarantees that the rights of the Iranian people will be respected.

He also said that the nuclear negotiations have created the opportunity to prove Iran’s resolve in pursuing a negotiated solution to the nuclear issue.

Rouhani added that “progress (in nuclear talks) has been very slow,” therefore all sides must move faster to try to reach a comprehensive agreement as soon as possible.

Regarding a possible deal on Iran’s peaceful nuclear program, Rouhani said, “Not only will the agreement benefit Iran and the P5+1 group but also the stability and security of the entire region.”

Referring to the US-led international sanctions against the Islamic Republic, the Iranian president said that they are harming both the countries that imposed them and the Iranian nation.

“The sanctions must be lifted fully. Any agreement in which the lifting of sanctions is not mentioned explicitly is not acceptable to the Iranian people,” he stated.

Iran and the six world powers are currently in talks to work out a final accord that would end the dispute over Tehran’s civilian nuclear program.

On Thursday night, Iranian Foreign Minister Mohammad Javad Zarif, EU foreign policy chief Catherine Ashton and US Secretary of State John Kerry held a meeting in New York to discuss progress made during the ongoing nuclear talks and to confer on how to proceed with the negotiations. Zarif leads the Iranian negotiating team while Ashton represents the P5+1 group.