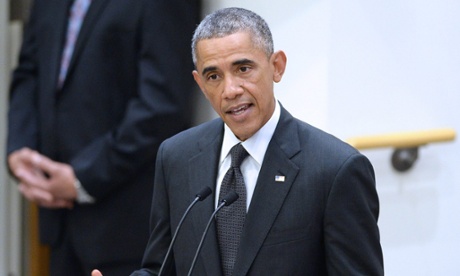 Obama speaks on Ebola. ‘Right now everybody has the best intentions, but people are not putting in the resources that are necessary.’ Photograph: Behar Anthony/EPA

President says world cannot expect US to combat the virus alone, and expresses frustration at inaction from other countries

Barack Obama warned the world on Thursday not to “stand back” and expect the United States to combat the spread of the Ebola virus alone, saying a slow international response could cost hundreds of thousands of lives.

Speaking at a special high-level meeting on Ebola at the United Nations, Obama said there had been progress in efforts to slow the disease at its epicentre in Liberia, Sierra Leone and Guinea. But he added: “We need to be honest with ourselves. We’re not moving fast enough. There’s still a significant gap between where we are and where we need to be.”

The international response had to be “like a marathon, but run at the pace of a sprint”.