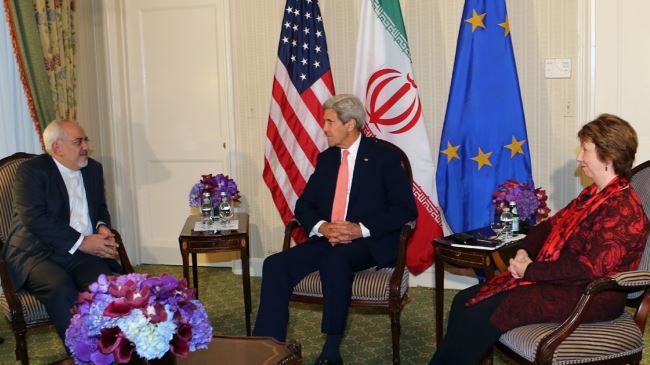 The three top diplomats sat down in New York on Thursday night to discuss progress made during the ongoing nuclear talks and to confer on how to proceed with the negotiations.

Iran and six world powers – the United States, France, Britain, Russia, China and Germany – are currently in talks to work out a final accord that would end the dispute over Tehran’s civilian nuclear work.

Zarif leads the Iranian negotiating team while Ashton heads the opposite side.

During a meeting with his German counterpart Frank-Walter Steinmeier on Wednesday, Zarif said that Iran is determined to reach a final deal with six world powers and called on the West to seize the “rare” opportunity to settle the “fabricated” dispute over Tehran’s nuclear work.

Iran and the six world powers clinched an interim deal in Geneva, Switzerland, last November. The agreement took effect on January 20 and expired six months later. In July, they agreed to extend the negotiations until November 24 amid differences over a number of key issues.