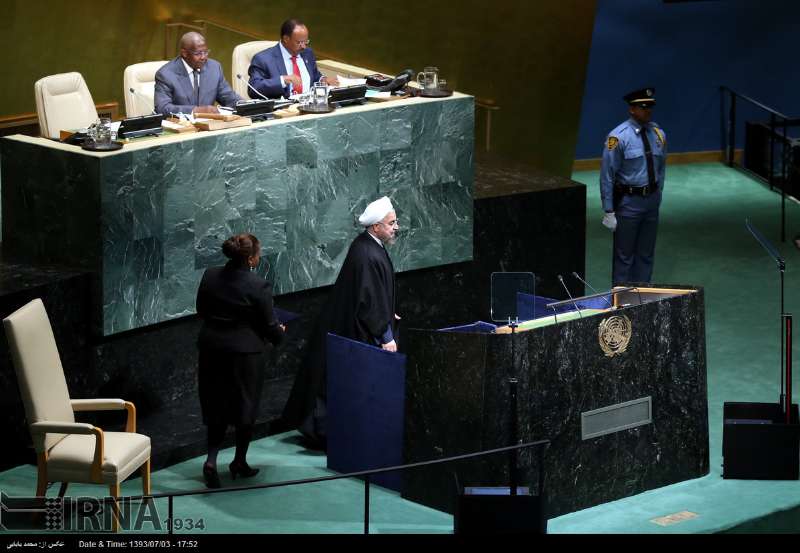 Iran blames ‘errors’ of outsiders for rise of Islamic State

(Reuters) – Iran President Hassan Rouhani on Thursday blamed the rise of the Islamic State group and other militants on the mistakes of the West and said the solution to stopping them must come from the Middle East.

“The strategic blunders of the West in the Middle East, Central Asia and the Caucasus have turned these parts of the world into a haven for terrorists and extremists,” he said in a speech to the 193-member United Nations General Assembly.

In a thinly veiled reference to the United States and Israel, Rouhani blamed the rise of violent extremists on outsiders. “Certain intelligence agencies have put blades in the hand of madmen, who now spare no one,” he said.

The comments were among the strongest yet by predominantly Shi’ite Iran on the rise of the Sunni militant group, suggesting Washington and its allies were the problem, not the solution, and that Middle Eastern governments should deal with the threat.

“The right solution to this quandary comes from within the region and regionally provided solutions with international support and not from the outside the region,” he said.

But Rouhani suggested the United States and Iran have a shared interest in confronting the threat after decades of enmity.

The comments follow a back-and-forth between Tehran and Washington over what role Iran can play in the U.S.-led campaign against Islamic State militants who have seized swaths of Iraq and Syria. Iranian officials have even suggested Western powers should scale back their demands in nuclear talks with Tehran helping confront the militants.

While Washington has repeatedly ruled out military “coordination” with Iran against Islamic State, U.S. Secretary of State John Kerry said last Friday during a U.N. Security Council session on Iraq that he believed Tehran could play a role.

The United States, backed by five Arab allies, this week carried out air strikes against Islamic State positions in Syria, expanding an air campaign against the group in Iraq.

Despite Iran’s obvious interest in seeing the militants neutralized, Rouhani made clear his suspicions about the long-term impact of Western military intervention in the Middle East.

“All those who have played a role in founding and supporting these terror groups must acknowledge their errors,” he said.

A day earlier, U.S. President Barack Obama used the U.N. podium to state his case for a more forceful, coordinated global response against Islamic State that would seek to dismantle what he called a “network of death.”

For Iran’s clerical rulers, the crisis over Islamic State poses strategic and geopolitical challenges to Tehran’s so-called dream of forming a so-called Shi’ite Crescent that extends from Iran to Iraq, Syria, and Lebanon, say analysts and diplomats.

Some Iranian officials see the crisis in Iraq as an opportunity for Iran, arguing that the hostility between Washington and Tehran has hurt both states and played into the hands of the militants.

But Western governments say Assad himself is largely to blame, because for years he allowed the group to flourish on the margins of a civil war that in 3 -1/2 years has cost 190,000 lives and forced 10 million people from their homes.

Despite his dismissive remarks toward the West, Iran has quietly made overtures to the United States and its allies on combating Islamic State. Several Iranian officials told Reuters last week that Iran would like the West to make concessions in nuclear talks with Tehran as a reward for fighting the group.

In Thursday’s speech, Rouhani said securing a long-term nuclear accord that would end sanctions against Tehran in exchange for curbing its atomic program would be the “beginning of multilateral collaboration aimed at promoting security, peace and development in our region and beyond.”

Rouhani’s much-anticipated speech was in contrast to last year when he appeared at the General Assembly as Iran’s new “moderate” president, making a splash by telling the world Tehran posed no threat and offering immediate talks on removing any “reasonable concerns” over his country’s nuclear program.

Fast-forward a year: Nuclear talks between Iran and six world powers have not collapsed but they are at an impasse.

On the current round of talks in New York on the sidelines of the General Assembly, Rouhani said the negotiations have taken place “with seriousness and optimism on both sides.”

The meetings between Iran and the United States, Britain, France, Germany, Russia and China are expected to continue until Friday. Diplomats say a breakthrough is unlikely, even though a Nov. 24 deadline for a deal is only two months away.

Rouhani said Iran is committed to maintaining its uranium enrichment program, the biggest sticking point in the negotiations, and warned that delaying a deal would have economic costs for everyone. He said he was hopeful there would be an agreement in the “short amount of time left.”

German Foreign Minister Frank-Walter Steinmeier met alone with Rouhani for nearly an hour. Speaking to reporters afterwards, Steinmeier said, “We have never been so close to a deal as now. But the truth is that the final phase of the talks that lay before us is probably the most difficult.”