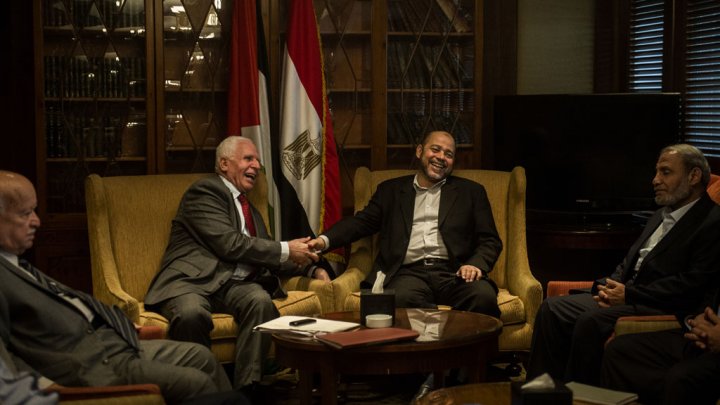 Fatah, Hamas agree to give unity government control of Gaza

Palestinian factions Hamas and Fatah reached an agreement on Thursday by which the unity government run by President Mahmoud Abbas would take control of the Gaza Strip, negotiators in Egyptian-mediated reconciliation talks told reporters.

Officials from the rival groups were meeting in Cairo to try to overcome their differences and strengthen their hand for talks with Israel slated for late next month.

The Gaza ceasefire struck in August between Israel and the Palestinians included stipulations that the Palestinian Authority, led by Abbas, should take over civil administration in Gaza from Hamas.

But a dispute over the Palestinian Authority’s non-payment of salaries to Gaza’s public sector workers brought tensions between the two main Palestinian factions to near-breaking point.

Moussa Abu Marzouk, chairman of Hamas’ political bureau, said control of Gaza’s border crossings, another contentious issue, would lie with the United Nations in addition to the unity government.

“The United Nations will come to an agreement with Israel and the unity government on how to run the crossings,” Marzouk said. He added that Rafah border crossing with Egypt was not part of the talks.