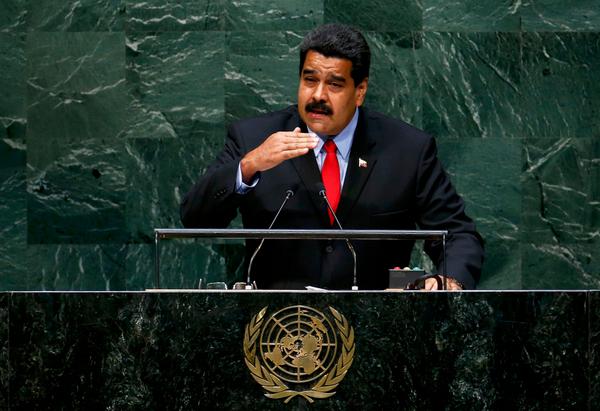 Venezuela’s leftist President Nicolas Maduro on Wednesday accused Western powers of helping create the jihadist crisis in the Middle East and said that the only solution involved respecting regional governments.

In his first speech to the U.N. General Assembly since succeeding the firebrand Hugo Chavez last year at the helm of the South American nation, Maduro said that the Ebola virus was the world’s biggest threat but that Western powers were busy “bombing the people of Iraq and Syria.”

Maduro, like his predecessor a frequent critic of the West, said he agreed on the need to “fight terrorism” but criticized Western support for other rebels battling President Bashar al-Assad.

“Only an alliance that respects these nations’ sovereignty and the assistance of their governments, people and armed forces will truly defeat Islamic terrorism as well as all of the terrorist forces that have emerged like a Frankenstein, a monster nursed by the West itself,” he said.

U.S. President Barack Obama, with support from Arab and European allies, has launched air strikes to push back the Islamic State movement. But he has also demanded that Assad step down and stepped up support for rebels in Syria who are seen as more moderate.

Maduro said that, if Assad were overthrown, “today throughout this vast region of Syria, Lebanon, Iraq and Jordan these terrorist groups would have established power.”

“The democratic and constitutional government of Syria has detained terrorists and suffered thousands of deaths,” Maduro said.

Maduro joined calls for reform of the United Nations, accusing powers of violating the world body’s original charter which he described as “one of the loveliest poems we can ever read.”