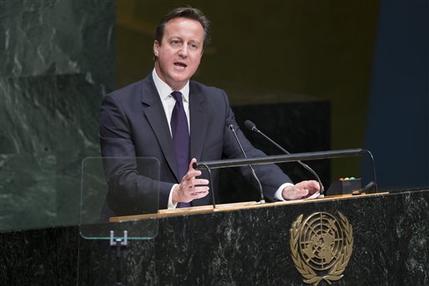 Cameron wants UK to join in airstrikes in Iraq

David Cameron announced the move in his address to the U.N. General Assembly.

Cameron did not mention the prospect of also joining the U.S.-led international airstrikes against the Islamic State group in Syria that began this week.

The threat of the terror group’s grip on large parts of both Iraq and Syria has dominated this week’s annual gathering of world leaders.

Cameron also warned against believing that it’s necessary to “do a deal” with Syrian President Bashar Assad to defeat the Islamic State group, calling that thinking “dangerously misguided.” He said the brutality of Assad’s government has been a powerful recruiting tool for extremists during the conflict there, which is now in its fourth year.

Assad’s government has not asked for international intervention in fighting the Islamic State group, but Iraq has.

The prime minister defended his decision to pursue the UK’s involvement in airstrikes in Iraq, saying that the Islamic State group’s threat is global and that “when the safety and security of our people is at stake, we must be uncompromising in our response.”

There are lessons to be learned from the past, including the invasion of Iraq a decade ago, he acknowledged, but “isolation and withdrawing from a problem like ISIL will only make things worse,” he said, using one of a number of acronyms for the Islamic State group.

Cameron also said Iran could help in defeating the terror group’s threat. He met with Iran’s president Wednesday, the first such meeting since the Iranian revolution in 1979.