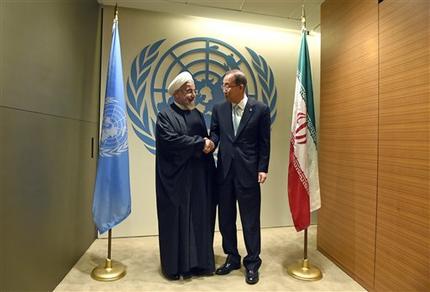 UNITED NATIONS (AP) — Facing a world in turmoil from multiple crises ranging from wars in the Mideast and Africa to the deadly scourge of Ebola and growing Islamic radicalism, leaders from more than 140 countries open their annual meeting at the United Nations on Wednesday with few solutions.

The issue certain to top the agenda is the threat from Islamic terrorists intent on erasing borders, with the first U.S. and Arab airstrikes in Syria delivered Monday night in response.

Many diplomats hope that crisis won’t drown out the plight of millions of civilians caught in conflicts in Syria, Iraq, Central African Republic, South Sudan, Ukraine and Gaza; the misery of the largest number of refugees since World War II; and global support for new U.N. goals to fight poverty and address climate change.

Looking at the array of complex challenges, Norway’s Foreign Minister Borge Brende told The Associated Press: “It’s unprecedented in decades, that’s for sure.”

He pointed to an unprecedented situation in which the U.N. and international donors are confronting four top-level humanitarian crises at the same time in Iraq, Central African Republic, South Sudan and Syria, which is now in the fourth year of a civil war which the U.N. says has killed more than 190,000 people

Secretary-General Ban Ki-moon, who will deliver his state of the world report at Wednesday’s opening of the General Assembly ministerial session, gave a bleak preview to reporters last week: The world is facing “multiple crises,” with all featuring attacks on civilians and having dangerous sectarian, ethnic or tribal dimensions.

In addition to the major conflicts, Ban said the world must not forget the continuing violence in Mali, the volatile situation in and around Ukraine, the chaos in Libya, the greater polarization between Israelis and Palestinians following the recent devastating war, and the advances of Boko Haram in Nigeria which “grow more alarming every day.”

The secretary-general said he will call on world leaders to unite to uphold human dignity and the rule of law.

Soon after, U.S. President Barack Obama will step to the podium, and he is certain to dwell on the terrorist threat. Rights groups have called for him to explain how the campaign against the Islamic State extremist group is in accordance with international law.

Obama also will chair a Security Council meeting later Wednesday at which members are expected to adopt a resolution that would require all countries to prevent the recruitment and transport of foreign fighters preparing to join terrorist groups such as the Islamic State.

The opening of the annual U.N. meeting, which ends Sept. 30, follows the highest-level meeting ever on climate change, with some 120 world leaders responding to the secretary-general’s call for increased political momentum to address the warming planet.

“For all the immediate challenges that we gather to address this week – terrorism, instability, inequality, disease – there’s one issue that will define the contours of this century more dramatically than any other, and that is the urgent and growing threat of a changing climate,” Obama said.

But Obama, along with China, the world’s largest greenhouse gas emitter, said he would not propose targets to reduce carbon pollution beyond 2020 until early next year. The summit also exposed longstanding political divisions between rich and poor countries, raising questions about whether a new climate pact will be reached by the end of 2015.

Two prominent no-shows are Liberian President Ellen Johnson Sirleaf because of the Ebola crisis that has hit her country hardest and Ukrainian President Petro Poroshenko, who gave no public reason.

While the assembly’s newly renovated chamber will be the scene of constant speech-making, most of the real “business” during the General Assembly takes place in private meetings and dinners. This year’s side events cover a number of crisis countries including Iran, South Sudan, Myanmar, Yemen and Somalia, with a recently added high-level meeting on Ebola.

Iyad Madani, secretary general of the 57-member Organization of Islamic Cooperation, said there are “a multiplicity of crises” that are unpredictable, but “I think we are relatively a more peaceful world than in World War I, II, Korea, Vietnam or the Cold War.”