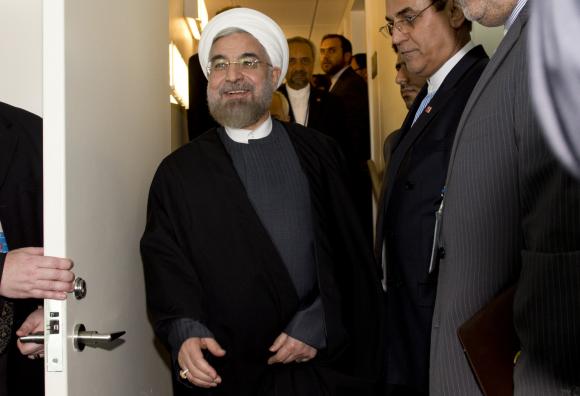 Iran’s President Hassan Rouhani arrives for a meeting with his French counterpart Francois Hollande (not pictured) on the sidelines of the U.N. General Assembly in New York September 23, 2014.
CREDIT: REUTERS/ALAIN JOCARD/POOL

(Reuters) – If Iran and world powers reach a long-term nuclear deal that ends sanctions against Tehran, the agreement will open the door to deeper cooperation on regional peace and stability and the fight against terrorism, Iran’s president said on Tuesday.

President Hassan Rouhani, who spoke to senior editors ahead of the annual gathering of world leaders at the U.N. General Assembly, said he had no plans to meet U.S. President Barack Obama while in New York City.

“Without a doubt, reaching a final nuclear deal will expand our cooperation, and we can cooperate in various fields including restoring regional peace and stability and fighting against terrorism,” he said through an interpreter.

Senior foreign ministry officials from the United States, Britain,China, France, Germany, Russia and Iran are meeting this week in New York. Officials close to the talks say a deal is unlikely in coming days given deep disagreement on issues such as the scope of Iran’s future enrichment program.

The sides have set a Nov. 24 deadline for a long-term agreement that would end sanctions on Tehran in exchange for curbs on its nuclear program.

“The talks occurring will clear many things, whether we will be able to reach a final agreement or not,” he said. “I believe both sides have reached the conclusion that the continuation of the current condition doesn’t benefit anyone…. So why not make strides to reach this agreement?”

He appeared to suggest relations with the United States had improved despite their differences, and even if no final agreement is reached, the negotiating process, inconceivable two years ago, had altered relations.

“It doesn’t mean we will go back to the way things were prior,” he said. “The ground will be paved for further cooperation if the nuclear issue is resolved.”

He said Iran was determined to resolve the nuclear issue.

“If there is a serious will, we can reach a final agreement in the next two months,” Rouhani said. “Our wish is to close this dossier forever.”

Iranian officials last week told Reuters that Tehran was ready to work with Western powers to stop Islamic State militants, who have taken over substantial territory in Syria and Iraq, but would like concessions on Tehran’s uranium enrichment program in return.

Hours before Washington and Arab allies launched airstrikes against Islamic State positions in Syria for the first time, the White House declared that it refused to connect the nuclear talks with the fight against the militant group.

LEGALITY OF AIRSTRIKES IN SYRIA?

Washington broke off ties with Iran during a hostage crisis after the 1979 Islamic Revolution. Rouhani succeeded the fiercely anti-Western Mahmoud Ahmadinejad as president in August 2013, and the two estranged nations have gradually resumed senior-level contacts while remaining deeply suspicious of each other.

Rouhani, viewed by comparison as a soft-spoken pragmatist with strong ties to Iran’s Supreme Leader Ayatollah Ali Khamenei, is on his second visit to New York as the head of Iran’s government. He will address the 193-nation General Assembly on Thursday.

The Iranian president appeared to question the legality of the airstrikes in Syria. He neither condemned nor endorsed the military action by the United States and Arab allies but said there were formal legal procedures that must be followed.

“Bombarding a country has a legal process,” he said. “It should take place within the framework of the U.N., or that country’s leaders should have asked for it to be carried out officially and formally.”

Without a U.N. mandate or formal government request, military interventions “don’t have any legal standing,” he said.

An Iranian foreign ministry spokeswoman, however, was quoted by the semi-official Fars news agency as saying the U.S. strikes were a violation of Syria’s sovereignty and a breach of international law. She added that they will further complicate the situation in the region and have negative consequences worldwide.

Syrian President Bashar al-Assad is a close ally of Iran, which has provided military support to his government during its civil war, now in its fourth year.

Syria’s U.N. Ambassador Bashar Ja’afari told Reuters on Tuesday that he was personally informed by U.S. Ambassador Samantha Power of imminent U.S. and Arab airstrikes against Islamic State targets on Syrian territory hours ahead of time.

U.N. Secretary-General Ban Ki-moon said the airstrikes by the United States and Arab allies were targeting extremists in Syria who pose a serious threat to international peace and security – a standard legal justification for military force.

“Our relationship with Saudi Arabia … deserves to be warmer,” he said. “Saudi Arabia’s positions are getting closer and closer to us.”

Shi’ite Muslim Iran and Sunni Saudi Arabia are enmeshed in a struggle for influence across the Middle East and have supported opposing sides in wars and political disputes in Iraq, Syria, Lebanon, Bahrain and Yemen.