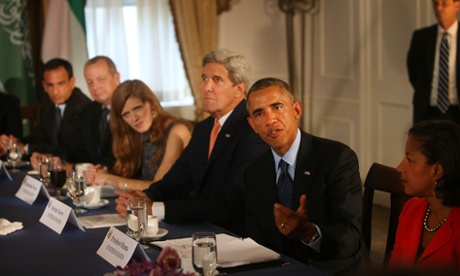 US president Barack Obama and advisers meet with representatives from the countries that have participated in air strikes against Isis in Syria. Photograph: Spencer Platt/Getty Images

Five air strikes hit territory controlled by Islamic State (Isis) in Syria near the Iraqi border on Wednesday, following overnight attacks on the group’s strongholds along the Turkey border.

Rami Abdulrahman, who runs the Syrian Observatory for Human Rights, said warplanes had carried out raids west of the city of Kobani, also known as Ayn al-Arab, near Turkey, and Al-Bukamal on the Iraqi border.

It was not clear who had carried out the raids, but Adulrahman said the jets that struck Kobani flew in from the direction of Turkey.

“The people there, the activists, say [the strikes] are probably the [international] coalition, not the regime,” Abdulrahman said, referring to the Syrian government. “The strength of the explosions are greater. Like yesterday.”