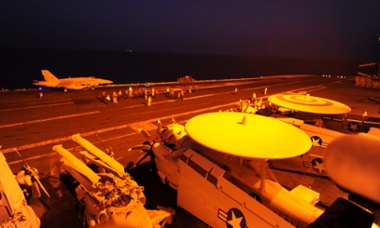 US confirms 14 air strikes against Isis in Syria

The most intensive barrage of air strikes launched against Islamic State (Isis) since the US fight against the terror group began last month thundered into northern Syria until after dawn on Tuesday, heralding a new phase of a war that Sunni regional powers have vowed to help lead.

Large explosions were reported in the group’s stronghold of Raqqa, in eastern Syria, as well as in Idlib province. There were unconfirmed reports that attacks had also taken place near Deir Azzor and western Aleppo.

A Pentagon statement said the 14 strikes against Isis targets were carried out with Bahrain, Jordan, Saudi Arabia, the United Arab Emirates and Qatar. Jordan confirmed it its airforce had “destroyed a number of targets that belong to some terrorist groups that sought to commit terror acts inside Jordan” without making explicit reference to Syria.