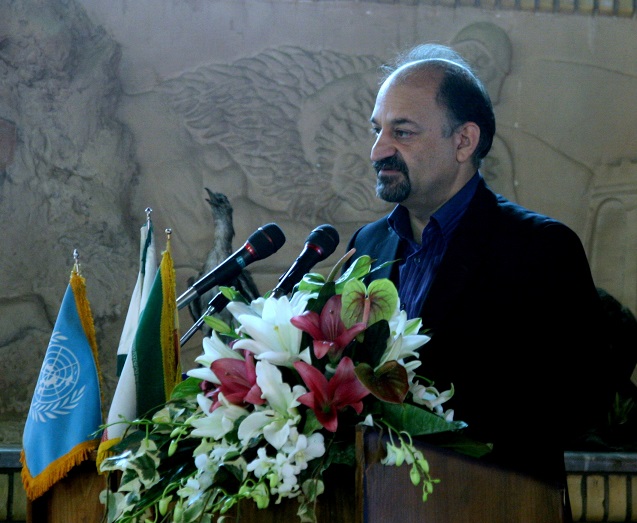 Dr. Saeid Motessadi, Deputy Head of the DoE, emphasized on the significance of people’s participation in decision making processes, as well as on international

The Montreal Protocol is arguably the most successful international agreements penned.

How can this success be measured?  Over the past several years, the Protocol has led to the phase-out of close to 100% of ozone-depleting chemicals.  Very-recent findings indicate that the Ozone-layer is beginning to slowly recover from the release of Ozone-depleting gases.
As a result, the ozone layer – which shields the earth from cancer-causing ultraviolet rays – is showing early signs of thickening after years of depletion.  This is the consensus view of both the UN Environmental Programme (UNEP) and the World Meteorological Organisation (WMO).
In addition, the ozone hole that appears annually over Antarctica has also stopped growing bigger every year.

Mr. Gary Lewis remarked: “The secret of the Montreal Protocol’s success was that the Protocol was rooted in a community of knowledge – in scientific consensus – and in partnership with industry.”

One popular conclusion is that if the Montreal Protocol had never existed our planet’s atmospheric levels of ozone-depleting substances would have risen tenfold by the year 2050. And the consequence of this is that cases of skin cancer would be dramatically higher.Iran’s adherence to the Montreal regime and the changes instituted – with UN help – were celebrated in Tehran today.
The event took place at the Department of Environment (DoE). The day marks the 27th anniversary of the Montreal Protocol, one of the most successful international agreements in history, ratified by all 197 parties.
“The secret of the Montreal Protocol’s success,” said Gary Lewis, UN Resident Coordinator, “was that Protocol was rooted in a community of knowledge – in scientific consensus – and in partnership with industry.” Mr. Lewis added: “The Protocol further benefitted from a dedicated financial support mechanism – the Multilateral Fund – which was able to support businesses while they converted indigenous production processes to environmentally-friendly alternatives.”Formally titled “The Montreal Protocol on Substances that Deplete the Ozone Layer” the agreement was designed to reduce the production and consumption of ozone depleting substances such as hydro-chloro-fluoro-carbons (HCFC) in the refrigerant and foam industries, methyl bromide – a pesticide used in the agriculture industry, and halons for fire protection. The parties to the Protocol have so far reduced over 98% of all ozone depleting substances.

As the Representative of the United Nations Industrial Development Organization (UNIDO), Mr. Alessandro Amadio discussed the role of industry in controlling ozone-depleting substances.

Mr. Lewis who is also the Resident Representative of the United Nations Development Programme (UNDP) as well as Mr. Alessandro Amadio, Representative of the United Nations Industrial Development Organization (UNIDO) were among key presenters. Other keynote speakers included Dr. Saeid Motessadi, Deputy Head of the Department of Environment, Dr. Ebrahim Hajizadeh, the National Ozone Unit Project Manager, Dr. Baghestani the Head of the Flora Organization, as well as representatives from the Customs Organization, the Ministry of Trade Industries and Mines, and the Union of Cooling Industries.

Dr. Hajizadeh, the National Project Manager, described the Hydro-chloro-fluoro-Carbon (HCFC) phase out plan project activities  leading to Iran meeting its obligations under the Protocol. He cited policy and regulations, training and information sharing, performance monitoring, and international collaborations with UNDP, UNIDO, The German Federal Enterprise for International Cooperation (GIZ) and UNEP, as the major components of the project success. Dr. Motessadi, Deputy Head of the DoE, emphasized on the significance of people’s participation in decision making processes, as well as on international collaborations. Mr. Gary Lewis started his speech with the Secretary General’s Statement

This year’s celebration is marked by the theme: ‘The Mission Goes On’.

He then built upon this year’s Ozone Day Theme “The mission goes on”, to stress on the importance of the remaining work to be done in the context of the bigger climate change threat. Mr. Lewis referred to the preliminary findings of the Third National Communication Project to the UN Framework Convention on Climate Change (UNFCCC) implemented by the DoE (TNC project) – saying that Iran faces a hotter and drier future. The UN Resident Coordinator shifted thereafter his speech to the topic of climate change, desertification, water scarcity and food security to raise awareness on the danger of continuing business as usual. Mr. Lewis ended by suggesting solutions, relying on actual good practices of what has been done so far to combat climate change.

UNIDO’s representative, Mr. Alessandro Amadio, recognized the mature Iranian industry and existing technical capacities to adopt new technologies. Mr. Amadio highlighted the issue of coordination among various ministries in the implementation of the Montreal Protocol, and the need to strengthen negotiation capacities. In that context, UNIDO’s Representative urged the Ministry of Foreign Affairs to ensure that international agreements are strongly supported by international law in order to make them sustainable.

The Ozone Day ceremony ended with an award presentation to a selected journalist from Salamat Radio News for her coverage on hazardous environmental substances. This was followed by a choir of students from a local girl’s school singing about the protection of the ozone layer.