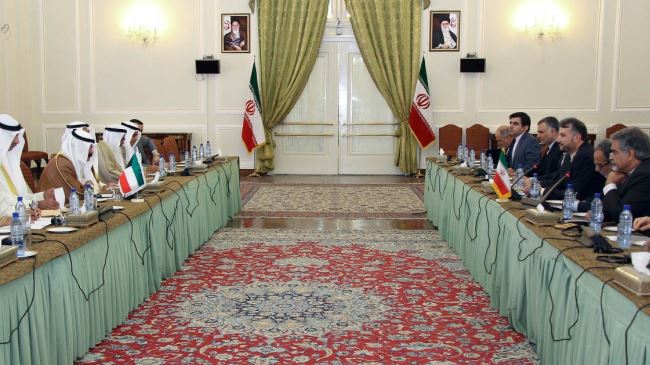 Iran and Kuwait hold the first session of their Joint Political Committee in Tehran on September 22, 2014.

Iran and Kuwait have held the first meeting of their Joint Political Committee in the Iranian capital, Tehran, to discuss bilateral ties and the latest developments in the Middle East.

During the session, the Kuwaiti official hailed the growing relations between Tehran and Kuwait City, reaffirming his country’s determination to strengthen bilateral cooperation with Iran in all spheres.

He also pointed to an invitation by Kuwaiti Emir Sheikh Sabah al-Ahmad al-Jaber Al Sabah for Iranian President Hassan Rouhani to visit the Arab country, saying the trip would be a turning point in bilateral relations.

Amir-Abdollahian, in turn, voiced Iran’s readiness to bolster relations with Kuwait in all domains and said Tehran was ready to enforce its previous agreements with Kuwait City.

He also warned against the common threats posed by ISIL Takfiri militants to all regional states and said Tehran had from the start cautioned against political and financial support for the terrorist group.

The foreign-backed Takfiri militant group has terrorized various communities, including Shias, Sunnis, Kurds, Christians and Izadi Kurds, in their advances.

Some Western states and their regional allies, including Qatar, Saudi Arabia, and Turkey, are reportedly giving financial and military support to Takfiri militants.