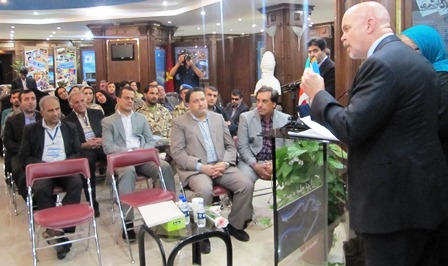 UN Resident Coordinator, Mr. Gary Lewis: “If we, as human beings, expect the right to live in peace, what is our obligation to make that peace happen?”

The Tehran Peace Museum also celebrated the International Day of Peace on 21 September. The event opened with the reading out of the message of the ‘Survivors of War’ by Mr. Mohammad Reza Taghipour Moghadam, a war veteran and Executive Director of Tehran Peace Museum, emphasizing the necessity to promote a culture of peace.

Speaking on the occasion, the UN Resident Coordinator in the Islamic Republic of Iran, Mr. Gary Lewis, pointed to the “right to peace” aspect of the UN Secretary General’s message indicating that all rights have reciprocal obligations. He indicated that there are a number of things which can be considered obligations incumbent on governments and individuals to reduce the risk of conflict. According to Mr. Lewis, “If we, as human beings, expect the right to live in peace, what is our obligation to make that peace happen?” Among these obligations is the need to reduce poverty, reduce injustice, protecting the environment, improve accountability and “promote a culture of peace”. He added that the concept of “human security” should be elevated as an effective measure of security of peoples.

The gathering was also addressed by former President Seyed Mohammad Khatami who said, ‘The dialogue among civilizations should take place to confront the war among civilizations.’ He continued, ‘The warmongers and violence-seekers must leave the scene so that peace and tolerance would be established,’ and highlighted, ‘Only through co-existence, mutual understanding, sincerity in living with others and rejoicing over their achievements can we speak about peace.’ Mr. Khatami suggested, ‘We must listen to the messages and teachings of the peacemakers and prophets and fill life with affection and dialogue.’ He also emphasized, ‘We must stand in solidarity with each other so that the wishes of the warmongers would be rescinded in the bud.’

Speaking at the event, the Director and Representative of UNESCO Cluster Office in Tehran, Ms. Esther Kuisch Laroche, called for solidarity amongst all and underscored the importance of fostering ‘dialogue, understanding and trust between people’ in order to achieve peace, and said “education, science, culture and art are all important tools to bring us together”.

The International Day of Peace was established in 1981. In 2001, a General Assembly resolution declared 21 September as an annual day of non-violence and cease-fire. Since then, the UN encourages the day to be commemorated through raising public awareness on issues related to peace.

Click here for more information about the World Peace Day.