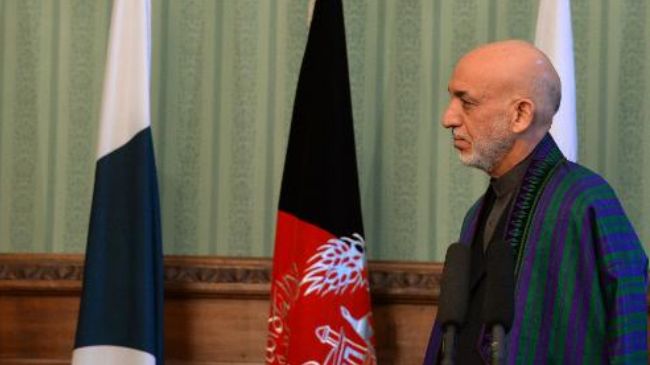 Afghanistan’s Karzai takes one last swipe at US

KABUL, AFGHANISTAN: Outgoing Afghan President Hamid Karzai used his farewell speech on Tuesday to take one last swipe at the United States, capping a long-testy relationship with the accusation that America hasn’t wanted peace in Afghanistan.

The only president Afghanistan has known since the 2001 U.S.-led invasion said the United States wanted war in Afghanistan “because of its own interests.” Karzai’s relationship with the U.S. has grown increasingly fragile in recent years, but the U.S.-Afghan relationship may get a reset on Monday, when President-elect Ashraf Ghani Ahmadzai will be sworn in.

The United States has spent more than $100 billion on aid in Afghanistan since 2001 to train and equip the country’s security forces, to pave crumbling dirt roads, to upgrade hospitals and to build schools. But Karzai in his speech thanked a slew of countries for their help — India, Japan, China, Iran, Turkey, Saudi Arabia, South Korea and Germany — without mentioning the U.S.

The speech fingered the U.S. and the military leaders of neighboring Pakistan as the powers backing perpetual war.

The United Nations says that some 8,000 Afghan civilians have been killed in the conflict over the last five years alone. Karzai for years has railed against U.S. military strikes for the civilian casualties that some of them cause — although the United Nations has said insurgents are to blame for the overwhelming majority of casualties.

In his final year in office Karzai refused to sign a security agreement with the U.S. that would set the legal framework to allow about 10,000 American military advisers and trainers to stay in the country next year. Ghani Ahmadzai has said he will sign it.

Karzai’s relationship with President Barack Obama is seen as weak, though Secretary of State John Kerry appears to have a rapport with the outgoing Afghan president. Dozens of telephone calls made by Kerry to the two top presidential candidates helped bring about a political deal signed Sunday for a unity government. Ghani Ahmadzai was announced by the election commission as winner of a June runoff election plagued by a huge amount of vote fraud. Opponent Abdullah Abdullah will fill the newly created role of government chief executive.

U.S. military and intelligence operatives helped transport Karzai around the region in late 2001, shortly after the attacks in New York and Washington. That U.S. connection helped pave the way to the presidency.

Ghani Ahmadzai’s entrance is more conventional. A former finance minister, the new president has worked at the World Bank and earned a PhD from New York’s Colombia University. His path to the presidency follows a long election season that ended with the election commission giving him 55 percent of the runoff vote.

The 13-year war against the Taliban has largely been turned over to Afghan security forces, a development that has seen casualties among Afghan soldiers rise significantly this year.