AEOI chief: West left with no option, but agreeing with Iran 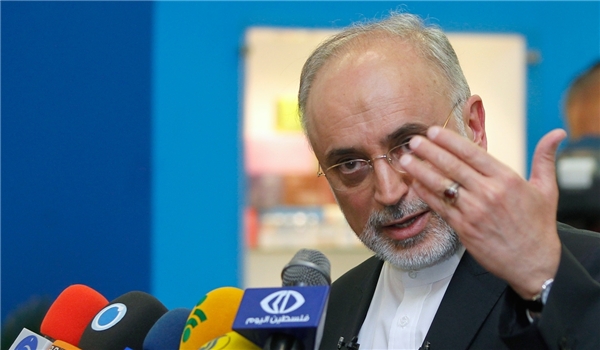 Addressing a meeting with the family members of his organization’s martyrs and handicaps on Tuesday, Salehi pointed to the International Atomic Energy Agency’s demand for visiting Parchin non-nuclear military site, and said, “We have told them that they have already visited Parchin twice; the first time that they visited it they said it was enough, but after some time they renewed their request again and (after the second visit they) said again that it was enough, but now they are repeating the same request.”

Salehi said his organization does not have a problem with the IAEA inspectors’ visit to Parchin, but the problem is that Iran’s national sovereignty does not allow others to make instant demands on the basis of their will and outside the international regulations and conventions.

“We have a safeguards agreement with the IAEA now and we act within that agreement and we have even taken some steps beyond that,” he added.

Salehi said if Iran joins the additional protocol again the IAEA can act within that protocol and their inspections can be extended.

The IAEA inspectors have at least two times visited the Parchin military site in the past and found no evidence of nuclear activities in it.

Former Head of the Atomic Energy Organization of Iran (AEOI) Fereidoun Abbasi said in March 2013 that Tehran would allow the IAEA to visit its non-nuclear military site in Parchin again only if the UN nuclear watchdog convinces it of the necessity of such a visit by presenting relevant documents.

“As I have said before, Parchin isn’t a nuclear site and no nuclear activity is carried out in there,” and if the IAEA believes that it should visit this site, it “should present its documents about nuclear activity in this site so that we can discuss the issue with our military officials,” Abbasi told reporters in Tehran at the time.

Also in April, 2013, Abbasi had said that the UN nuclear watchdog should explain why it intends to send its inspectors to the Parchin military site because the AEOI has no station or activity in there and the site has already been inspected by the IAEA.

He pointed to the IAEA’s concern about Iran’s refusal to allow an inspection of Parchin, and noted, “If we enter another country, would they allow us to visit (inspect) wherever we want?”

“We (AEOI) have no site in Parchin; Parchin has been repeatedly accused despite the fact that it has gone under inspection in the past,” Abbasi said.

He reminded that the IAEA should have a strong argument to convince Iranian officials, including the defense minister, that inspection of Parchin is necessary, and said, “Our military commanders are rational people (and would allow IAEA access to Parchin if they are presented with a good reasoning), but the point is that we in the Atomic Energy (Organization of Iran) have not been convinced by the IAEA inspectors of the goal of such a visit.”

Iran in April dismissed the allegations raised by a Zionist media that the country has delivered a stockpile of low-enriched uranium to its Parchin military site.

“The Zionist regime is losing (the game) and it seems that they are attempting to fool the world due to the (bad) situation they are entangled in,” AEOI Spokesman Behrouz Kamalvandi told FNA.

Noting that the Zionist regime is angry at the normalization of relations between Iran and the western countries after the start of the talks between Tehran and the Group 5+1 (the US, Russia, China, Britain and France plus Germany), he said, “The regime is seeking to disrupt this trend (of talks) through certain measures.”

Kamalvandi dismissed the claims raised by the Zionist Debka website that Iran has delivered 1,300kg of low-enriched uranium to its Parchin military site, and said, “Raising such baseless allegations will unveil the real face of the Zionists more than before to make more clear to the world that their earlier news and reports (about Iran) have also been of the same type and lies.”