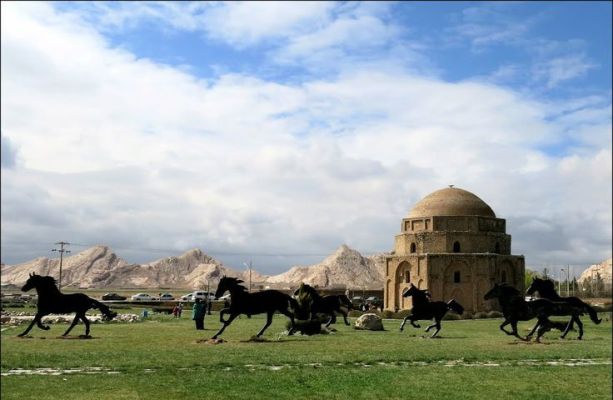 The first of this three is Takht-e-Darya-Gholi-Beig, a monument in the side of the hills in the east of Kerman. The juxtaposition of the monument with the greatest man-cultivated forest of Iran; Jabaliyeh Dome (Gonbad-e-Jabaliyeh; Rock dome); and Dokhtar and Ardeshir historical citadels could complete the tourism triangle of Kerman.

Kerman’s multiplicity of historical monuments gives the city a prominent place in the history; however, repetition of visual signs and of monument types has worked to diminish the social value of these monuments in the eyes of the public. One such monument is Takht-e-Darya-Gholi-Beig located in skirts of Mt. Saheb al-Zaman in east of Kerman.

The juxtaposition of classic colors of the monuments and its neighboring green garden creates breath-taking imagery. The monument had survived the onslaught by different nomadic tribes who sacked the city in different times in history and also tremors of earthquake, which rocked the city several times. The garden, also historical in origin, bestows beauty, unparalleled elsewhere in the city, on these monuments a historical aura.

The tourism possibilities and potentials have gone unnoticed by the city magistrates. It is interesting that an ancient lake, now dried up, in the vicinity of the Takht which contributed to the beauty of the place. The lake was made possible using traditional means and local technical capabilities.

Mohammad Bazmandeh, a local historian says the Takht monument had been built on a higher ground where the relics of an ancient citadel and towers, still uncharted for their age, can be discernible. “The place is in fact the shrine of Qoli Beig, the chief of Afshar tribe (a Turkic Abdali tribe) who ruled Kerman in Safavid era,” he adds, “the place of the monument in the skirts of the mountains and the major crossing path of the Caravans have added to the monument greatness.”

He quotes Bastani Parizi (a famous literary figure and historian of Kerman) who ascribed much power based on historical facts to Qoli Beig. “Parizi writes that the Takht was first built by this formidable ruler; Qoli Beig also was credited with having transferred the body of water which had once operated a watermill and also supplied water to a region called Sarasiab Farsangi to the place now Takht located,” explains the historian. “The water was directed through canals carved in the heart of the rocky terrain to contribute to a lake beside the monument; the lake’s contours are still traceable; the lake had been contributing to the beauty of the combination of the mountain, crossing, and the whole region,” Bazmandeh says.

“Sir Percy Molesworth Sykes, an orientalist and traveler, inter alia other positions he had, has mentioned the monument in his travelogue,” he notes.

Ali Mohajeri, the head of province’s Cultural Heritage Organization told Mehr News that Dokhtar and Ardeshir citadels are other monuments contributing to the tourism triangle, which he believed, could be the heart of the city’s tourism industry. “Jabalieh Dome, an octagon building, is older than Gholi Beig Takht; it was probably built during Saljukid era,” he said.