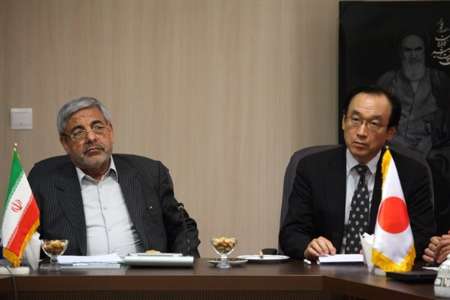 Orumiyeh: Sept 22, IRNA – Japanese Ambassador to Tehran Kuji Haneda said on Monday that the huge amount of salt at Orumiyeh lake could play significant role in the economic development of the West Azarbaijan province.

The Japanese ambassador made the remarks in a meeting with Governor-General of West Azarbaijan Ghorbanali Sa’adat on Monday.

The salt at Orumiyeh late is a well known brand with medical values and for a long time has opened its market in Japan, said the Japanese ambassador.

Orumiyeh lake is well known in worldwide and its salt is suitable for export, said the Japanese ambassador.

The province has high very potentials in terms of economy, tourism industry and cultural heritage, he said.

The governor general of West Azarbaijan, for his part, recalled that in the past a Japanese delegation accompanying foreign minister toured the region and enjoyed the beauty of the lake.

The current status of Orumiyeh late is unsatisfactory, Sa’adat said.

Experts believe that Orumiyeh lake salt reserves stand at over tens of millions of tons which could be a good source of income. He however warned against the danger of salt stroms in the region.

Appreciating the United Nations Development Program’s endeavors to revive Orumiyeh Lake, Haneda said that UNDP has offered special supports in this regard.

Iran and Japan signed cooperation agreement on revival of Orumiyeh Lake last May.

In view of the lake’s critical situation, the Japanese government has decided to contribute one million dollars to UNDP’s project to revive the dying lake.

Sa’adat said that the lake can be revived within ten years if optimal management is exercised.