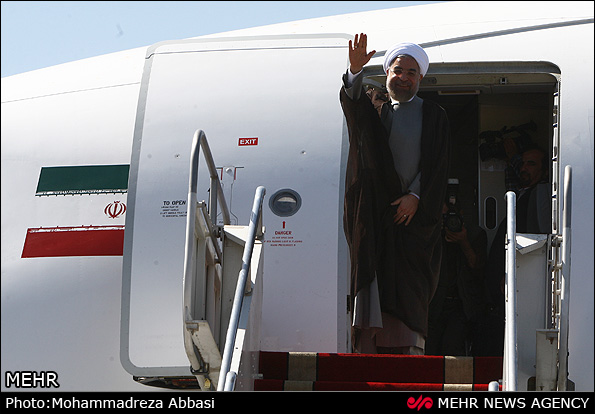 TEHRAN (FNA)- Iran’s President Hassan Rouhani departed for New York on Monday to take part in the annual UN General Assembly session and meet with several world leaders on the sidelines of the high-profile global conference.

The Iranian president is due to address the UN General Assembly meeting.

In his address, Rouhani will deliver Iranians’ message to the world on the most important international issues.

He will also have several meetings with high-ranking officials of some states on the sidelines of the assembly.

On Wednesday, Government Spokesman Mohammad Baqer Nobakht announced that there is no plan for a meeting between President Rouhani and his US counterpart Barack Obama on the sidelines of the 69th annual session of the United Nations General Assembly in New York.

The 69th Session of the UN General Assembly (UNGA 69) will convene at UN Headquarters on Tuesday, 16 September 2014.

Last year when the Iranian president was en route to the airport to return to Iran, he and Obama spoke over phone in an unprecedented move, at least, in the last 35 years.