Firouzabadi criticizes use of “Islamic State” for ISIL 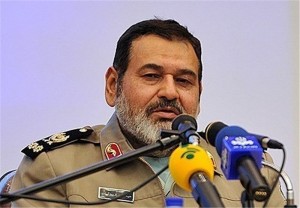 Tehran, Sept 22, IRNA – Major General Hassan Firoozabadi, Chief of Staff of the Iranian Armed Forces, on Monday criticized the US officials for calling terrorists active in Iraq and Syria as “Islamic State”.

Speaking to reporters on the sidelines of a ceremony held to celebrate The Sacred Defense Week, he said that US officials have titled the terrorist group active in Syria and Iraq as “Islamic State” and this shows that they have created the group to spread Islamophobia.

The Islamic State of Iraq and the Levant (ISIL, also known as Daesh) is not capable to challenge Iran’s mighty and powerful armed forces, he added.

Firoozabadi referred to latest ISIL defeats in Iraq and removal of ISIL blockade of Amerli region and added that Iraqi people themselves can defeat the terrorists and there is no need for Iran’s military interference.

He called the anti-ISIL coalition led by US a plot for deploying more foreign troops in the region including Iraq and Syria.

Iran’s Armed Forces are prepared to defend the country against any type of aggression, the general added.

ISIL’s brutal attacks have displaced thousands of people in Syria and Iraq and hundreds of people have been executed by the terrorist group.

The terrorist group in its self-proclaimed state as an Islamic caliphate claims religious authority over all Muslims across the world and aspires to bring much of the Muslim-inhabited regions under its direct political control.

Former US Secretary of State Hillary Clinton has admitted in her memoirs titled Hard Choices that the United States had a role in creation of ISIL.