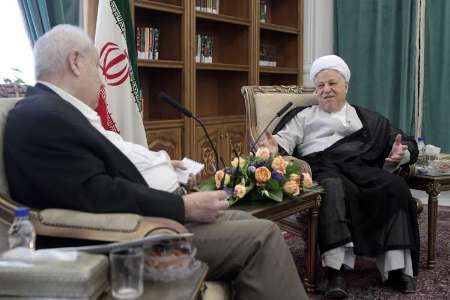 Rafsanjani made the remarks in a meeting with Palestine Ambassador to Tehran Salah Zawawi.

He said perhaps western media raise hue and cry to cover up facts and sometimes misportray them but the divine help for protection of the innocents is a divine promise as the international community saw repeatedly in long years of Palestine occupation.

He added that support of global superpowers to Israeli crimes in Gaza marks a dark stain in the diplomacy of the western governments, especially the US.

“The so-called advocates of human rights, crimes against defenseless people, especially innocent women and children of Gaza, are the supporters of an armed to the teeth army of Tel Aviv regime.

Palestine Ambassador briefed Rafsanjani on the latest situation in Palestine, especially Gaza, and said people of Palestine have always been considering Islamic Revolution as their supporter in resistance and are honored to enjoy support from Iran.

Zawawi, thanked Iran for its strategic policies on Palestine.

He thanked the role of Ayatollah Rafsanjani in making Iranian people acquainted with the dirty plans of the global arrogance and the Zionists.