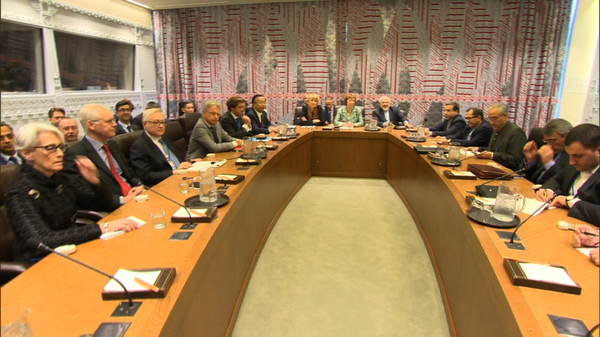 Iran and the five permanent members of the UN Security Council plus Germany are reportedly discussing a new proposal over the Iranian nuclear energy program.

The new proposal “would leave much of Iranian enriching machines in place but disconnected from feeds of uranium,” the Associated Press reported.

The Iranian delegation is headed by Foreign Minister Mohammad Javad Zarif while Catherine Ashton, the EU foreign policy chief, leads the other party.

The proposal is now one of the subjects of discussion in the ongoing talks. Reports say the proposal would give the United States room to modify demands that Iran decrease the number of its centrifuge machines.

Neither Iran nor the P5+1 members have yet made any comments about the reported issue of the proposal so far.

Tehran has repeatedly stated that it would not retreat from its right to uranium enrichment.

Iran and the six countries signed an interim deal in Geneva, Switzerland, last November. The agreement came into force on January 20 and expired six months later. In July, they agreed to extend the negotiations until November 24.