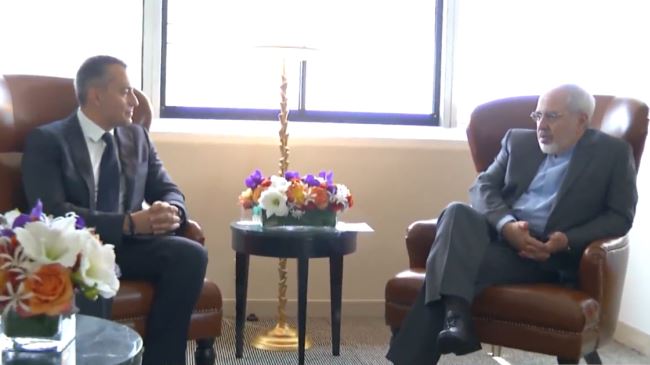 Iran’s foreign minister has discussed the issue of Takfiri terror in Iraq with the UN special representative for the Arab country.

Mohammad Javad Zarif met with Nickolay Mladenov, who is the special representative of UN Secretary-General Ban Ki-moon for Iraq, on the sidelines a UN meeting in New York on Saturday.

Iraq has witnessed savage activities, including beheadings and mass executions, by the ISIL Takfiri terrorists over the past few months.

“Iran as well as all Iraq’s neighbors can contribute to stability of Iraq,” the UN official told Press TV after the meeting with the Iranian foreign minister.

Mladenov went on to say that the new government in Baghdad has an “important agenda” to bring Iraq together to “restore security to the country, to implement reforms that address the concerns of all Iraqis.”

The UN official added that security can be restored with the help of “all Iraq’s neighbors” and their cooperation with the Iraqi government.

Iran’s foreign minister, for his part, reiterated that the challenges Iraq and the region face will not be resolved by military intervention of foreign countries.

Zarif added that it is up to the Iraqi government to provide stability to the people of Iraq. He said Iran and other regional countries should provide assistance to Iraq without undermining its sovereignty.

The Iranian foreign minister is in New York to attend the upcoming UN General Assembly meeting next week.

The Takfiri ISIL terrorists have seized large swathes of land in Iraq and Syria. They have carried out heinous crimes in the two countries.

They have threatened all communities including Shias, Sunnis, Kurds, Christians and Izadi Kurds.

Senior Iraqi and Syrian officials have blamed Saudi Arabia, Qatar, and some Persian Gulf Arab states for the growing terrorism in Iraq and Syria.