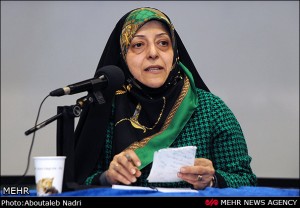 Tehran, Sept 21, IRNA – Vice-President and Head of the Department of Environment Masoumeh Ebtekar said on Sunday that the big industrial and economic powers should admit their historical responsibility and minimize the greenhouse emissions as soon as possible.

In a statement, issued on the occasion of the sit-in of the lovers of environment protection outside the DoE, Ebtekar said today, the effects of greenhouse emissions and global warming are understandable for many people and is a bitter experience for nations.

She said growth in tornadoes, draught, flood and other disasters are enemies of health, agriculture and economy of countries and the industrial nations should admit their historical responsibility.

She made clear that the developing states are suffering from degradation of environment and need support to deal with the hazards to the environment created by the industrial states.

She said that Iran has suffered a lot from draught and global warming as well as less rainfall that are partly due to greenhouse effects and partly for earth warming and climate change.

She added that regarding the same problems in the past one year, the 11th government in Iran had adopted important measures to reduce energy consumption and check the greenhouse emissions.

“Today is the world peace day based on the UN approval; that’s the day which recalls value of peace and failure of man in the present age to preserve it. Clashes and conflicts ranging from war and massacre to violence and terror have deplorably gripped nations and countries. September 21 marks birth of earth, which the first divine blessings to mankind. So, let’s join the human community to recall divine blessings, including nature, environment, peace and security for human beings and go together and strive for elevation of man and save the earth, wishing for rain, freshness and life.”