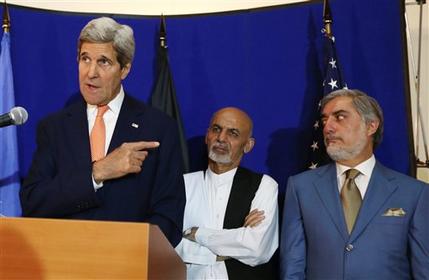 FILE – In this Friday, Aug. 8, 2014 file photo, U.S. Secretary of State John Kerry, left, speaks as Afghan presidential candidates Ashraf Ghani Ahmadzai, center, and Abdullah Abdullah listen during a joint press conference in Kabul, Afghanistan. “Radicals” backing Abdullah could foment postelection violence if he isn’t given an equitable share of power, his spokesman warned Saturday, Sept. 6, 2014 ahead of a meeting with his rival aimed at resolving a monthslong election dispute. U.S. Secretary of State John Kerry helped broker an agreement this summer under which all 8 million ballots would be recounted, a process which was concluded Friday. (AP Photo/Rahmat Gul, File)

KABUL, Afghanistan (AP) — Afghanistan’s two presidential candidates signed a power-sharing deal Sunday, capped with a hug and a handshake, three months after a disputed runoff that threatened to plunge the country into turmoil and complicate the withdrawal of U.S. and foreign troops.

The incoming president – Ashraf Ghani Ahmadzai – and Abdullah Abdullah signed the national unity government deal as President Hamid Karzai – in power since the 2001 U.S.-led invasion ousted the Taliban – looked on. The deal creates the new role of chief executive following weeks of negotiations on a power-sharing arrangement after accusations of fraud in the June runoff vote.

“I am very happy today that both of my brothers, Dr. Ashraf Ghani and Dr. Abdullah Abdullah, in an Afghan agreement for the benefit of this country, for the progress and development of this country, that they agreed on the structure affirming the new government of Afghanistan,” Karzai said after the signing.

The deal is a victory for U.S. Secretary of State John Kerry, who first got the candidates to agree in principle to share power during a July visit to Afghanistan. Kerry returned to Kabul in August and has spent hours with the candidates in repeated phone calls in an effort to seal the deal.

As talks dragged on, Abdullah’s mostly northern supporters threatened to form a parallel government or react violently to any outright victory by Ghani Adhmadzai, a former finance minister and World Bank official whose power base is in the country’s south and east. Ghani Ahmadzai said he always maintained that ethnic politics in Afghanistan demand some sort of power sharing deal and not a winner-takes-all government.

The deal will see Ghani Ahmadzai replace Karzai as president. Abdullah will hold the newly created post of chief executive, akin to a prime minister.

Abdullah believes he won the first round of the election back in April with more than 50 percent of the vote, which would have precluded a runoff. But the official results showed him winning about 45 percent of that vote in a crowded presidential field of 10, not quite enough for an outright victory.

He also believes he won a June runoff with Ghani Ahmadzai. But official totals – which the election commission said it would release on Sunday – show Ghani Ahmadzai with about 55 percent of the vote.

A power-sharing deal was almost sealed about a week ago, but Abdullah then demanded that no vote totals from the runoff be released.

U.N. and Afghan election officials spent weeks auditing the runoff results after allegations of fraud, a common occurrence over Afghanistan’s last two presidential elections. But Ghani Ahmadzai’s runoff vote total only dropped by about 1 percent after the audit. Abdullah’s side maintained the fraud was so sophisticated it was undetectable.

In the end, high-stakes negotiations – and not a precise vote tally – settled the country’s power structure.

The U.S. has been pushing for a resolution so the next president can sign a security agreement that would allow about 10,000 U.S. forces to remain in the country after combat operations wrap up at the end of the year.