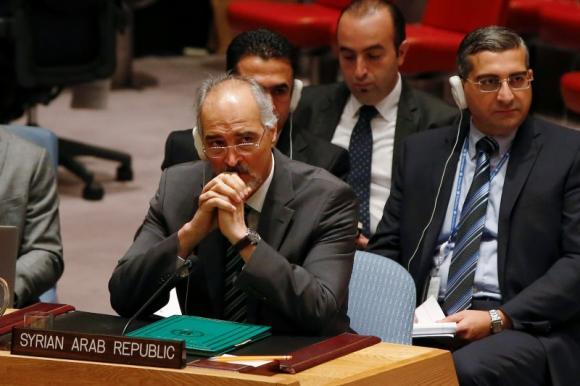 (Reuters) – U.S. Secretary of State John Kerry said on Friday that Iran had a role to play in a global coalition to tackle Islamic State militants who have seized swaths of Iraq and Syria and proclaimed a caliphate in the heart of the Middle East.

“The coalition required to eliminate ISIL (Islamic State) is not only, or even primarily, military in nature,” Kerry told a United Nations Security Council meeting on Iraq.

“It must be comprehensive and include close collaboration across multiple lines of effort. It’s about taking out an entire network, decimating and discrediting a militant cult masquerading as a religious movement,” he said. “There is a role for nearly every country in the world to play, including Iran.”

Kerry’s remarks appeared to represent a shift away from previous U.S. statements indicating a reluctance to cooperate with Iran to confront the threat of Islamic State. The United States cut off diplomatic ties with Tehran during a hostage crisis after the 1979 Islamic revolution.

The United States, president of the U.N. Security Council for September, called the meeting on Iraq as it builds an international military, political and financial coalition to defeat the radical Sunni Muslim group.

Iran’s supreme leader, Ayatollah Ali Khamenei, this week said he had rejected an offer by Washington for talks on fighting Islamic State. Kerry said he refused to be drawn into a “back and forth” with Iran over the issue.

Shi’ite Muslim-dominated Iran is a key ally of the governments in Iraq and Syria.

“The Islamic Republic of Iran is the only country in the region that is both capable of and has shown unqualified determination to help the Iraqi government and coordinate with it to assist all those threatened by ISIL,” Iran’s Deputy Foreign Minister Abbas Araqchi told the council.

“Any real and genuine initiative to remedy regional predicaments needs to originate from within the region and be based on regional cooperation. Combating extremism is not an exception,” he said, repeating Tehran’s official view.

Kerry and Iranian Foreign Minister Mohammad Javad Zarif are expected to hold bilateral talks on the sidelines of the annual gathering of world leaders at the U.N. General Assembly next week where Islamic State and Tehran’s nuclear program will likely be among key topics of discussion.

U.S. President Barack Obama has said 40 nations have pledged help to a coalition against Islamic State. French jets struck a suspected Islamic State target in Iraq for the first time on Friday, joining a U.S. bombing campaign that started a month ago when Iraq asked for help.

“In 2003, acting against Iraq was something that divided this council; in 2014, acting for Iraq and against the (Islamic State) … terrorists is a duty for all of us,” French Foreign Minister Laurent Fabius told the U.N. Security Council, referring to French opposition to the 2003 U.S.-led invasion of Iraq.

The U.N. Security Council on Friday adopted a statement urging “the international community, in accordance with international law, to further strengthen and expand support for the government of Iraq as it fights ISIL (Islamic State) and associated armed groups.”

The U.N. special envoy to Iraq, Nickolay Mladenov, said the United Nations estimates some 8,500 have been killed during clashes in Iraq since January and more than 16,000 injured.

“ISIL is a scourge that has brought untold sorrow to the people of Iraq and Syria,” Mladenov told the Security Council. “They have shown contempt for equality, fundamental human rights and the dignity and worth of the human person.”

The United States is also planning to carry out air strikes against Islamic State in Syria, while the U.S. Congress on Thursday gave final approval to Obama’s plan for training and arming moderate Syrian rebels to take on the militants.

Other Western powers have been more reluctant to launch military strikes in Syria, which could be seen to bolster President Bashar al-Assad. Western states have repeatedly called for Assad’s departure over his crackdown on popular protests in 2011 that sparked a civil war, now in its fourth year.

Russian U.N. Ambassador Vitaly Churkin warned that any action by an international coalition against Islamic State should be in line with international law and the U.N. Charter.

He said Russia, long an ally of the Syrian government, was “extremely concerned” about possible air strikes against the militants in Syria without the Damascus government’s approval.

“Any other options are considered illegal and undermine international and regional stability,” he said.

Iran’s Araqchi said the fight against Islamic State would only be successful if the relevant central governments were enabled to “deal with this menace.”

“Any strategy that undermines these authorities, including the Syrian government … will be a recipe for defeat,” he said.