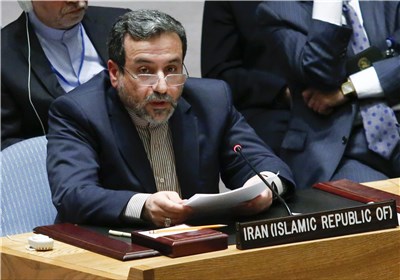 TEHRAN (Tasnim) – An Iranian deputy foreign minister specified eight requirements for a comprehensive strategy to fight against extremism during his speech at a United Nations meeting on Friday.

In the UN Security Council debate on the situation concerning Iraq, held in New York on Friday, Iran’s Deputy Foreign Minister for Legal and International Affairs Seyed Abbas Araqchi lashed out at the Islamic State in Iraq and the Levant (ISIL) terrorist group for its “abhorrent brutality and shocking savagery”.

Pointing to a so-called international coalition against the ISIL, the Iranian official called on the coalition members to pursue a serious strategy.

Araqchi then put forward an eight-point proposal, which he said a comprehensive strategy to defeat extremism should include.

“First, fully complying with the norms and principles of international law and the provisions of the UN Charter in conducting any military actions against terrorist groups.

Second, expanding support for the Iraqi government as it fights ISIL, helping it strengthen Iraq’s national unity and territorial integrity as well as encouraging its all-inclusive political system. This approach requires discouraging centrifugal forces and avoiding to tinker with Iraq’s ethnic and sectarian mosaic.

Third, encouraging all states and tapping all capacities in the region to fight the war against extremism and terrorism with the assistance of the international community and working towards unifying and coordinating policies. Any loophole or foot-dragging will leave a vacuum that will be used by extremists.

Fourth, consistency in fighting ISIL wherever it is present, be it in Iraq, Syria, Lebanon or elsewhere, and whoever it threatens, is a must. A successful fight against the ISIL requires helping and enabling the relevant central authorities to deal with this menace. Any strategy that undermines these authorities, including the Syrian government that resisted ISIL for few years, or differentiates between segments of population in terms of protection will be a recipe for defeat. It was regrettable that the city of Sanjar was left to the mercy of ISIL and Amerli agenized for more than two months under the ruthless siege, due apparently to only belonging to different segments of population

Fifth, peacefully settling crisis in Syria through encouraging a political solution to the protracted war in that country and rectifying the mistakes made in the past.

Sixth, engaging all regional states and international actors to deny extremists access to funds, recruits and other wherewithal that they use to spread terror across the region and beyond. That should include resolute actions to putting an end to moral and financial support for extremists coming from some quarters within certain countries in the region. This is important especially in the light of the fact that groups such as ISIL won’t be uprooted only by airstrikes.

Seventh, putting an end to the Israeli occupation of the Arab lands and denying it impunity for war crimes against the Palestinians, as it was the case recently. The kind of reaction by some Western powers to what can only be called genocide against the people of Gaza by the Israeli regime is a good rallying cause for extremist groups such as ISIL.

The Islamic State in Iraq and the Levant is a militant group in Iraq and Syria believed to be supported by the West and some regional Arab countries.

On September 12, US President Barack Obama said the United States is assembling an international coalition to “snuff out” the Islamic State in Iraq and the Levant (ISIL) terrorist group.

Iranian officials have criticized Washington’s bid to build global support for military action against the ISIL as absurd and hypocritical.