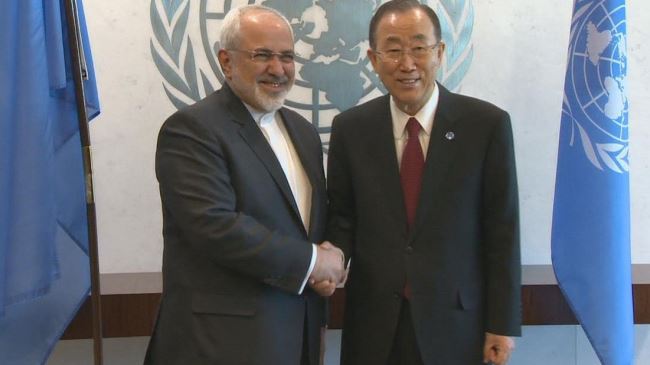 UN Secretary General Ban Ki-moon has highlighted Iran’s role in the Middle East, stressing the need to tap into the Islamic Republic’s potential to resolve crises in the region.

The Islamic Republic of Iran has a constructive and instrumental role in settling conflicts in the region and Iran’s potentialities should be utilized to resolve the current regional crises, Ban said in a meeting with Iranian Foreign Minister Mohammad Javad Zarif at the United Nations Headquarters in New York on Thursday.

He also described Iran as a key player in the Persian Gulf region.

Iran has repeatedly voiced readiness to further contribute to the establishment of peace and security in the region.

The Islamic Republic has on several occasions voiced support for the Iraqi government since it began fighting against the ISIL Takfiri terrorists in June. The ISIL terrorists are in control of some areas in Syria and have captured large swathes of land in neighboring Iraq.

Zarif, for his part, said that Iran remains committed to working towards reinforcing regional security and maintaining good relations with its neighbors.

He also said that Iran is dedicated to fighting extremism and terrorism.

The senior visiting Iranian diplomat noted that Tehran was determined to reach a final nuclear deal with the P5+1 countries and added, “We are optimistic about the conclusion of an agreement and believe that it is possible.”

He also pointed to a recent report by the UN chief about the rights situation in Iran and said it contradicts the realities on the ground in the country.

Referring to the alarming human rights situation in the region, Zarif said the report is politically-motivated and bears testimony to the double standards adopted on the issue of human rights.

Zarif is in New York for a new round of talks between Iran and the five permanent members of the UN Security Council – the United States, Russia, China, France and Britain – plus Germany over Tehran’s nuclear work, scheduled to start officially on Friday.