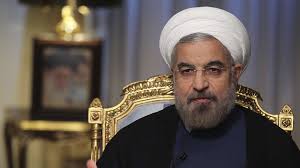 Tehran, Sept 19, IRNA – President Hassan Rouhani said Iran will resort to any possible means to avoid the fall of Iraqi holy sites such as those in Karbala and Najaf, or that country capital city Baghdad into the hand of the terrorists.

President Rouhani made the comment in an interview with the American CNN television, in response to a question whether Iran has land forces in Iraq.

‘I basically do not think there is any need to do so, unless the Iraqi Government would ask us.

Also regarding the probable Iran-US agreement on the US air raids against the ISIS, President Rouhani said that the US harmony with the Iraqi Government in that respect is sufficient, but if there is no such agreement and harmony, the move is condemned.

‘Will Iran support a probable US land force dispatch to fight against ISIS there?’ asked the CNN reporter.

‘Definitely not; because we do not consider such a move the right thing to do and the past experience, too, is proof that such foreign forces are not competent enough for the job. When the American forces were in Iraq there were terrorist explosions there every day. When with their huge forces there they failed to take back Fallujah forces from the terrorists, how can they do the same with a small number of forces?’ asked Rouhani.

He also ruled out Iran-US talks on campaign against ISIS on the sidelines of their New York nuclear talks, arguing that talks on any subject on the sidelines of those negotiations are possible, but we feel no necessity to negotiate with the Americans, or to cooperate with them in that respect, although if the Iraqi Government and people would ask for it, we will always be by their side.