Obama not due to meet Iran’s Rouhani but open to it: U.S. official 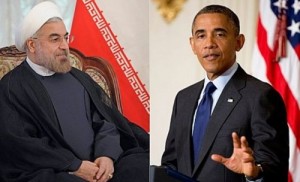 NEW YORK (Reuters) – U.S. President Barack Obama is not scheduled to meet Iranian President Hassan Rouhani in New York during the United Nations General Assembly next week, though the U.S. leader remains open to such a meeting, a senior U.S. official said on Thursday.

U.S. Secretary of State John Kerry is likely to hold bilateral talks with Iranian Foreign Minister Mohammad Javad Zarif on Tehran’s nuclear program and other issues on the sidelines of the annual gathering of world leaders at U.N. headquarters, the official said on condition of anonymity.

“At this point there is no meeting scheduled,” the official said. “The president of the United States is well known for being open to such a meeting but the choice is really Iran’s.”

A year ago, Obama and Rouhani, freshly elected president, held a historic telephone call after the General Assembly. Although both men were in New York at the time, they did not meet.

Iran and six world powers – the United States, Britain, France, Germany, Russia and China – resume negotiations on Friday to hammer out a long-term nuclear accord that would bring an end to international sanctions that have crippled the Iranian economy in exchange for curbs on Tehran’s atomic program.

The U.S. official said it was possible that foreign ministers from the six powers and Iran would join the nuclear talks on the sidelines of the General Assembly, two months ahead of a Nov. 24 deadline for a final agreement.

Ahead of those talks, U.S. Deputy Secretary of State William Burns and Under Secretary of State for Political Affairs Wendy Sherman – the No. 2 and No. 3 diplomats at the State Department – held bilateral talks with Iranian officials on Thursday.

“These meetings were constructive, and a lot of hard technical work that will need to be part of a comprehensive agreement is being undertaken by all parties,” the official said, without providing details.

Iranian and Western officials have said that a deal is unlikely to be reached during the talks in New York.

Zarif complained on Wednesday about what he described as unreasonable demands by Western powers in the nuclear talks to reduce the number of Iran’s uranium enrichment centrifuges.

The U.S. official said Washington is only demanding that Iran demonstrate its nuclear program is peaceful as Tehran insists is the case and ensure that it remain so.

“I don’t think either of those objectives … are unreasonable or excessive demands,” the official said, adding that if Iran takes the necessary steps, the sanctions can be lifted.

Western governments want Iran to have a centrifuge capacity in the low, single-digit thousands so that it would take Tehran a long time to use the machines to purify enough uranium to fuel an atomic weapon.

Tehran has rejected demands to significantly reduce the number below the more than 19,000 it has now installed, of which roughly half are operating. Instead it has proposed keeping that number constant for several years.

The U.S. official suggested such proposals were unacceptable: “The status quo is not doable for any of us.”

The official said Iran’s recent threats of possible retaliation, including accelerating its nuclear program if the talks fail were not helpful.

“I don’t find that particularly productive,” the official said. “We both know what each other would do if things don’t work out.”

Last November in Geneva, Iran and the powers reached an interim agreement under which Tehran won some easing of sanctions in return for halting its most sensitive nuclear work.

The official was asked if U.S. and Iranian officials discussed the threat posed by Islamic State militants, who have taken over large swaths of Syria and Iraq. The official responded by saying that they discussed Friday’s ministerial U.N. Security Council meeting on Iraq, which Kerry will chair and at which Islamic State will be a major topic of discussion.

Washington and Tehran have ruled out cooperation on fighting Islamic State militants.