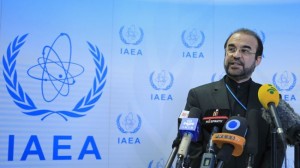 Iran’s ambassador to the International Atomic Energy Agency (IAEA) says a report by the agency confirms Tehran’s commitment to a deal between Iran and the P5+1 group reached in November.

“The recent report by the IAEA Director General (Yukiya Amano) which confirmed no violations in Iran’s nuclear energy program is a clear evidence for Iran’s cooperation and fulfillment of its commitments,” Reza Najafi said on Thursday.

The Iranian official further refuted allegations that Iran’s nuclear energy program “has military dimensions,” saying the Islamic Republic of Iran does not consider such claims valid.

Najafi made the remarks after Laura Kennedy, the US representative at the IAEA, claimed, “Concerns about the possible military dimensions of Iran’s nuclear program must be addressed as part of any comprehensive” deal between Iran and the six powers.

On May 21, the two sides held a technical meeting within the Framework for Cooperation agreed in November 2013. During the meeting, they agreed to five practical measures which were to be implemented by August 25.

On September 15, Amano confirmed that Iran had enforced three of the five transparency measures it had previously agreed to, and said Tehran and the IAEA had begun talks on the implementation of the two remaining measures.

Earlier this month, Najafi said given the complexity of the issues, Iran and the agency had already predicted it might not be possible to finish their reviews of the remaining issues by August 25.

Last November, Iran and the five permanent members of the UN Security Council – the United States, Russia, China, France and Britain – plus Germany signed an interim deal in Geneva, which took effect on January 20 and expired six months later. In July, Iran and the six countries agreed to extend negotiations until November 24 this year after they failed to reach common ground on a number of key issues.