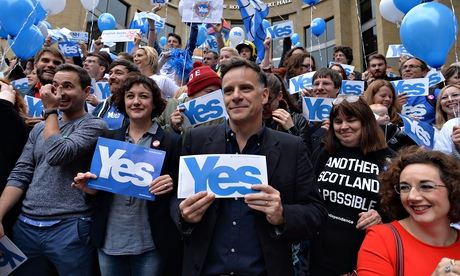 Scotland’s yes campaigners are voting to leave the Titanic

In Scottish city centres right now, you’re rarely out of sight of a yes badge. The vibe was summed up by an Edinburgh cabbie: “We’re being invited to run our country. It’s very exciting. Maybe we can show how things can be done differently”. It’s not just him. Polls have shown the yes vote surging.

It’s worth noting how remarkable this is. The only UK party supporting independence is the Greens. Of all of the local Scottish and British papers, only the Sunday Herald backs yes. The official story has long been that it’s only a few angry men in kilts who care about this.

But in the internet age, officials don’t get to write the stories any more. There were always people who had little time for flags, tartanry and shortbread, but who wanted to escape a political system that has made Britain one of Europe’s most unequal counties. And it is these people – a better organised and vastly more powerful version of the Occupy movement – that the Westminster parties and their media partners failed to consider.

Britain, Quoted, Scotland, Scotland’s yes campaigners, UK September 18, 2014
Iran rules out cooperating with US in Iraq
Zarif: US gained nothing from Iran sanctions