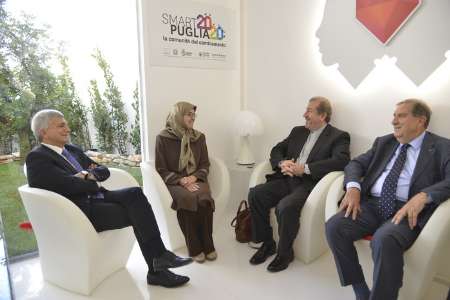 Rome, Sept 18, IRNA – Italian local officials in Bari province in a gathering dubbed ˈIntroducing business opportunities between Iran and Italyˈ on Thursday called for bolstering of economic and cultural relations and cooperation between the two countries.

Italian local officials expressed their views in a meeting with Iran’s Ambassador to Rome Jahanbakhsh Mozaffari on Thursday.

In the meeting, the Italian officials welcomed the gathering and voiced readiness to help broaden scope of economic cooperation with the Islamic Republic of Iran.

The Iranian ambassador, for his part highlighted Iran’s significant economic position in the region and said prospects of mutual economic and commercial cooperation between the two sides is very promising.

Promoting mutual cooperation in rail transportation, agriculture, fisheries, environment protection and tourism was on the agenda of the day-long gathering.