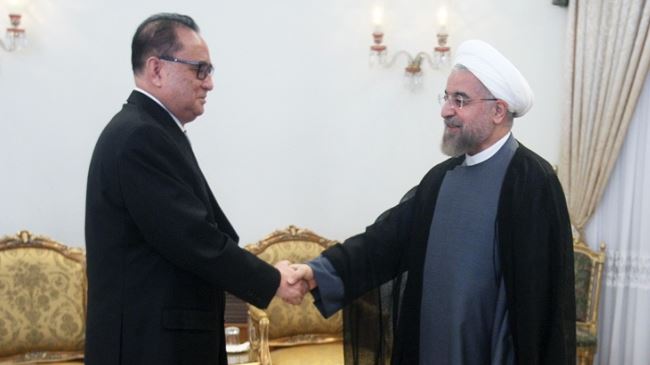 Iran’s President Hassan Rouhani has lashed out at certain countries for pursuing warmongering policies, stressing the importance of establishing peace and security on the Korean Peninsula.

“Certain countries seek war and warmongering policies in the region and across the world, but peace and security will be sustainable in light of leaders and officials’ prudence,” President Rouhani said in a meeting with North Korean Foreign Minister Ri Su-yong in Tehran on Tuesday.

He added that Tehran attaches special significance to improving relations with East Asian countries, saying Iran and North Korea can tap into their potential to further enhance reciprocal ties, particularly in economic and trade fields.

“Increased consultations and cooperation among Iranian and Korean officials can result in the strengthening of relations between the two countries,” Rouhani pointed out.

The North Korean minister, for his part, lauded Iran’s insistence on its absolute right to use nuclear energy for peaceful purposes as well as the country’s efforts to establish peace and security in the region.

He expressed his country’s determination to bolster economic and commercial ties with Iran.