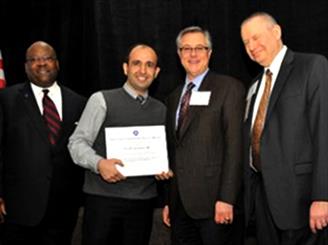 TEHRAN, Sep. 17 (MNA) – Mahdi Arezoumandi, an Iranian structural engineer from Qom, has won one of the five awards of 2014 O.H. Ammann Research Fellowships in Structural Engineering.

The O. H. Ammann Research Fellowship in Structural Engineering is bestowed annually to a member for the purpose of encouraging the creation of new knowledge in the field of structural design and construction. This year, one of the five winners was an Iranian structural engineer from Qom, Mahdi Arezoumandi.

After completing his Master’s Degree in Earthquake/Structural Engineering from Tehran Polytechnic in 2002, Mahdi Arezoumandi worked as a structural engineer at Small Industries and Industrial Park Organization (SIIPO) where he was involved in the design of a wide range of civil engineering structures. He came to the United States to continue his education in structural engineering in 2009, seeking PhD degree at Missouri University of Science and Technology.

He has published 19 journal papers and 11 conference papers so far, won couple of scholarships from Post Tensioning Institute (PTI) and Chi Epsilon Honor Society, and awarded the Nevada Medal for Distinguished Graduate Student Paper in Bridge Engineering in 2013.

More recently, he was awarded the National University Transportation Center (NUTC) student of the year in 2014.He has served as a vice president of both Chi Epsilon Honor Society and the Council of Graduate Student (CGS) at Missouri University of Science and Technology.

In regard to his proposal, Arezoumandi explained, “Concrete is one of the most common type of human-made product in the world the main constituent of which is cement.”

“Studies show that for every kilogram of cement produced, about one kilogram of carbon dioxide is released, which is harmful,” he continued, “One way to solve this problem and reduce the amount of released CO2 is to produce concrete from fly ash which I have evaluated in my PhD research.”

Fly ash is a by-product of coal-fired electric generating plants. The use of these byproducts offers environmental advantages by diverting the material from the wastestream, reducing the energy investment in processing virgin materials, conserving virgin materials, and allaying pollution.