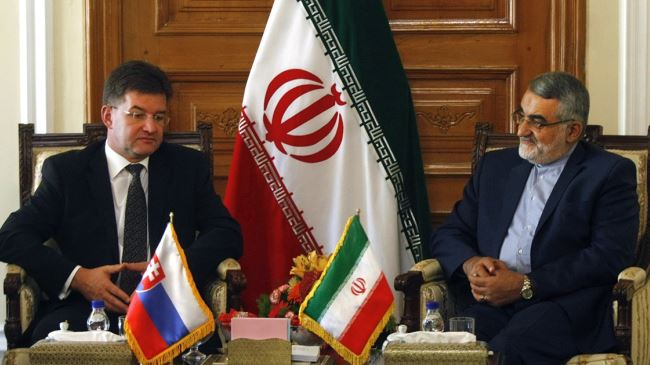 Alaeddin Boroujerdi, the chairman of the National Security and Foreign Policy of the Iranian Majlis, (R) meets Slovak Deputy Prime Minister and Minister of Foreign Affairs Miroslav Lajcak in Tehran on September 15, 2014.

A senior Iranian lawmaker says the US formed the so-called international coalition against the ISIL terrorist group to achieve its own “illegitimate objectives” in the Middle East.

Alaeddin Boroujerdi, who chairs the National Security and Foreign Policy of the Iranian Majlis, made the remarks in a meeting with Slovak Deputy Prime Minister and Minister of Foreign Affairs Miroslav Lajcak in Tehran on Monday.

“The US and its allies will fail in battling terrorists because of [their] selective confrontation policy, insincerity in fighting terrorism and [their spirit of] seeking personal gains in the [Middle East] region,” he added.

The Slovak official, for his part, said his country is keen to promote ties with the Islamic Republic, particularly in the economic, scientific and technological sectors.

Paris hosted a conference, dubbed the International Conference on Peace and Security in Iraq, on Monday to discuss ways of tackling the ISIL terrorists in Iraq and Syria amid US efforts to form a so-called international coalition to battle the Takfiri group.

Foreign ministers from the main European states, the five permanent members of the UN Security Council, Iraq’s neighbors and Arab states of Qatar, Saudi Arabia, Kuwait, and the UAE attended the one-day conference.

Despite the international community’s emphasis on the importance of Iran’s role in the regional developments, Tehran was not invited to the meeting in Paris mainly due to the US opposition. The US has also announced that Iran will not be a part of its so-called coalition against the ISIL.

Iran has cast doubt on the sincerity of the so-called coalition to fight terrorism.

“It is a joke that the countries which trained, equipped and financed terrorist groups now suddenly seek to fight these terrorist groups,” President Hassan Rouhani said on Monday.