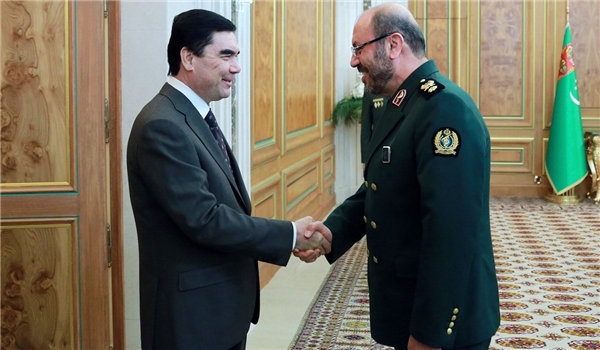 TEHRAN (FNA)- Turkmen President Gurbanguly Berdimuhamedov in a meeting with Iranian Defense Minister Brigadier General Hossein Dehqan in Ashgabat on Tuesday underlined the need for the further expansion of defense cooperation between the two countries.

“Tehran-Ashgabat relations should be expanded in all areas, specially in defense fields,” President Berdimuhamedov said during the meeting in the Turkmen capital today.

President Berdimuhamedov also referred to his recent meeting with his Iranian counterpart on the sidelines of the annual summit of Shanghai Cooperation Organization (SCO), and reiterated expansion of defense cooperation between the two countries.

Iranian defense minister, for his part, pointed to the status quo in Tehran-Ashgabat relations, and said, “The Islamic Republic of Iran is ready to cooperate with Turkmenistan in all areas, including defense and security cooperation.”

General Dehqan briefed President Berdimuhamedov on his yesterday meeting with his Turkmen counterpart Begenc Gundogdyyew, and said, “Defense and security cooperation leave positive effects the establishment of peace, stability and security in the region and the world.”

The Iranian defense minister underlined that terrorism and narcotics are two important causes of regional insecurity, and said, “Given its longtime experiences in fighting these inauspicious phenomena, Iran is ready to share its experiences and cooperate with its neighbors in these areas.”

On Monday, General Dehqan in a meeting with his Turkmen counterpart in Ashgabat underlined the two countries’ determination to further develop their defense relations.

During the meeting, Dehqan referred to Iran and Turkmenistan’s historical, cultural and religious commonalities, and said, “Such commonalities necessitate the expansion of bilateral relations at all levels.”

He underlined the emphasis of the two countries’ leaders on the development of all-out relations, and said, “The Islamic Republic of Iran assumes the security and progress of all the regional states, specially the neighboring countries, as those of its own.” Describing the Iranian and Turkmen borders as the borderline of brotherhood and friendship, Dehqan said, “This security and stability has provided a proper ground for the activating the potential capabilities and capacities of the two countries.”