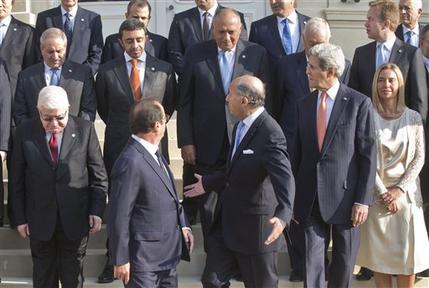 Kerry: US open to talks with Iran on Islamic State

PARIS (AP) — As more than two dozen nations pledged Monday to help Iraq fight the Islamic State militants, the United States said it was open to talking to Iran about a role in resolving the crisis, despite Washington’s earlier opposition to Tehran even attending the conference.

U.S. Secretary of State John Kerry ruled out any military coordination with Iran, which in the end was not invited to Paris.

“That doesn’t mean that we are opposed to the idea of communicating to find out if they will come on board, or under what circumstances, or whether there is the possibility of a change,” Kerry told a small group of reporters.

France and Iraq see Shiite-powerhouse Iran as an interlocutor who could bring its influence to bear in the region against the Sunni extremists of the Islamic State group, but some Arab states, like Saudi Arabia, disagree.

The U.S. opposed a place for Iran at the conference. But Tehran, which has political and military influence with its neighbor Iraq, still managed to be part of the conversation.

The absence of Iran underscored the conflicting sensitivities and complex politics in the region as Western countries seek to battle the Islamic State group, which has taken control of large parts of Iraq and Syria.

The meeting of foreign ministers from Asia, the Middle East and the West was a first step toward deciding who does what in a multilayered offensive against the Islamic State group. As envisioned by France and Iraq, the effort would include intensifying airstrikes, cutting off financing, and helping Baghdad cope through humanitarian aid and reconstruction. There would be no combat troops on the ground, however.

As the conference began, two French jets took off over Iraq in France’s first reconnaissance missions over the country in a sign of the larger battle ahead. Later, the United States, which has led airstrikes over Iraq since August, said it had taken the first step in its planned expanded fight against Islamic State militants, going to the aid of Iraqi security forces near Baghdad who were being attacked by enemy fighters.

The strikes represent the newly broadened mission authorized by President Barack Obama to go on the offensive against the Islamic State group wherever it is. Previous U.S. airstrikes in Iraq were conducted to protect U.S. interests and personnel, assist Iraqi refugees and secure critical infrastructure. U.S. officials said Iraqi forces requested assistance when they came under fire from militants.

“We are asking for airborne operations to be continued regularly against terrorist sites. We must not allow them to set up sanctuaries. We must pursue them wherever they are,” Iraqi President Fouad Massoum said, an apparent reference to neighboring Syria.

Syria, deep in a civil war waged in part by rival extremist groups, was the wellspring for the Islamic State group, with its fighters sweeping across the border into Iraq, overwhelming the military in Sunni-dominated Anbar province and capitalizing on grievances against the Shiite-led government in Baghdad.

The fighters went on to conquer Mosul, Iraq’s second-largest city, with the U.S.-trained military crumbling, and seized tanks and other military equipment, then steamrolled across northern Iraq.

The CIA estimates the group has access to between 20,000 and 31,000 fighters in Iraq and Syria – including foreigners lured to the cause.

“We must cut off their financing. We must bring them to justice and we must stop the fighters in neighboring countries from joining them,” Massoum said at the conference opening.

The group brings in more than $3 million a day from oil smuggling, human trafficking, theft and extortion, according to U.S. intelligence officials and private experts.

The Paris meeting was a coalition of strange bedfellows, some of whom have allegedly financed extremist groups in Syria and Iraq, and others, like Russia, which backs Syria’s Bashar Assad who is also supported by Iran.

Less than a week ago in Baghdad, Kerry was clear about the U.S. position regarding Iran, embroiled in a years-long dispute with the West over concern that Tehran wants nuclear weapons.

“The United States does not cooperate, militarily or otherwise, nor does it have any intention in this process of doing so, with Iran,” he had said.

France, stressing a pragmatic approach, felt Iran could be an ally against a common enemy if, as President Francois Hollande said, Tehran “abides by principles permitting a sincere and useful conversation.”

On Monday, Kerry, in an apparent about face, said he wouldn’t shut the door to talking to Iran about a common enemy.

“We’re not coordinating with Iran, but as I said, we’re open to have a conversation at some point in time if there’s a way to find something constructive,” he said.

Kerry spoke after Iran’s supreme leader, Ayatollah Ali Khamenei, said the U.S. had in fact requested that Tehran join the fight against the Islamic State group but it rejected the overture because of Washington’s “unclean intentions.”

Kerry did not respond directly to questions about that claim. He said there are often discussions on the sidelines of nuclear talks.

“I’m never going to shut the door to something that could solve a problem if there’s a way to do it,” Kerry said.

Back-door dealings are common in Middle East diplomacy, but it was unclear whether Iran would cooperate. Khamenei said Iran is proud not to be part of the U.S.-led coalition and warned it will suffer the same problems it suffered in the past should it enter Iraq and Syria without authorization.

Massoum would have liked Iran at the talks.

“We have a nearly 1,000-kilometer (625-mile) border with them (Iran) and from the first day the Islamic State group made itself known … Iran gave us humanitarian and military aid,” Massoum told The Associated Press ahead of the conference.

He conceded “there are perhaps sensitivities between certain countries and Iran.”

There was never any question of adding Iran to the coalition planning airstrikes, but Tehran is closely linked to Iraq.

“There will be no success in Iraq without cooperation with Iran,” said Francois Gere, of the French Institute of Strategic Analysis.

Opponents of Iranian involvements cite Iran’s backing of Assad, mainly via the Hezbollah group it helped create decades ago and, as one diplomat said, “all these dark zones about Iranian intentions.”

However, Russian Foreign Minister Sergei Lavrov insisted Monday that Syria and Iran are “natural allies” in the fight against the extremists, and therefore must be engaged, according to Russian news agencies.

“The extremists are trying to use any disagreements in our positions to tear apart the united front of states acting against them,” he said.

Talks and possibilities to review options with Iran are not over. Discussions likely will continue informally at the U.N. General Assembly later this month, French Foreign Ministry spokesman Romain Nadal has said.